Australia defeated New Zealand and winning all the matches they ended their Super 8 round with a clean slate! From the state of affairs till now, there seems to be no stopping this unit which has humbled all the sides with relative ease and consistency. Be it, South Africa or Sri Lanka, all of them appeared easy to come easy go!

Yesterday’s match was no exception and went the same way. Batting first Australia maintained a run rate of 7 runs per over despite losing Adam Gilchrist in the second over to a James Franklin delivery. “Haydos” Hayden and “Punter” Ponting carried the onslaught and ensured that the Kiwi fielders chased the leather at least once in an over. Thanks to this consistent hitting, the team had a 7+ run rate.

A few days earlier Ponting commented that the future of cricket would be dominated by “Goliaths” like Haydos and Kevin Pietersen and he was quite right for Matthew Hayden devoured the Kiwi bowlers and scored a fantastic century. His century came in pretty good time and all the while he was scoring at almost a run-a-ball.

His knock included a whopping 10 boundaries and 2 sixes, which meant 50% of his runs came off just boundaries! He batted in his

usual way- “Power batting” all the way through. Walking down the track, using brute strength, and powering his shots were the characteristics of the initial part of the innings, which mellowed down to singles in the middle overs.

Michael Clarke who ensured that the scoring rate did not dip and was maintained at any cost! He hit some gracious boundaries and was swift between the wickets which kept the scoreboard ticking.

Only when he was looking to accelerate, he got out in a manner that could be called “silly”! He was clean bowled when he failed to offer a shot to a ball that was heading straight for the stumps! Whether it was an error in judgment or a confused state of mind would be difficult to tell, but it surprised everybody from commentators, Kiwi players to viewers watching the match! 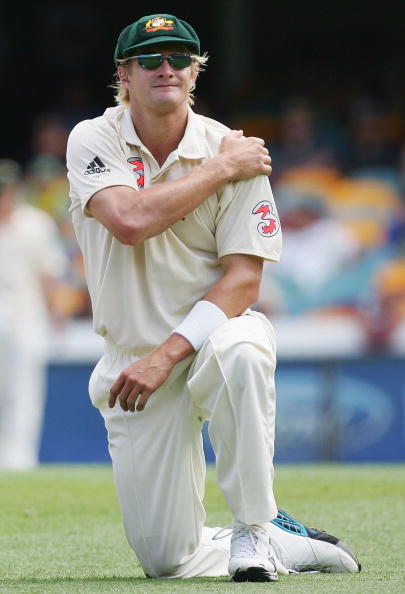 But Clarke’s dismissal brought another giant to the crease- Shane Watson, who was equally merciless as his predecessor Hayden. He came and increased the misery of the New Zealand team with his lusty

shots as he struck boundaries off slower balls, balls which were meant to fox the batsmen!

He struck 4 fours and 4 sixes scoring 40 of his 65 runs in just boundaries! This knock of 65 runs came from just 32 deliveries! His knock propelled Australia to a formidable total of 348 runs in 50 overs.

Kiwis had chased 300 plus totals in the recent past so this total by their standards was gettable but it would require a Herculean effort by one of its players to overhaul the target. Sadly for the kiwis, it was a case of “lightening does not strike twice” as they fell well short of the expectations in the chase. 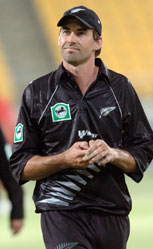 Stephen Fleming got a “raw deal” in terms of his dismissal and his exit generated the collapse for the Kiwis. He was given out caught behind when the ball had “grazed” his arm instead of hitting the gloves.

The team capitulated at a score of 133 and the match was wrapped in the 25th over.

Another staggering effort by former champions who looked relentless in all the departments of the game. This match gives a clear indication of what is to come for the fans in the semi-finals- all-around entertainment!