You are here: Home / Business / Bill Gates back on top of the rich list 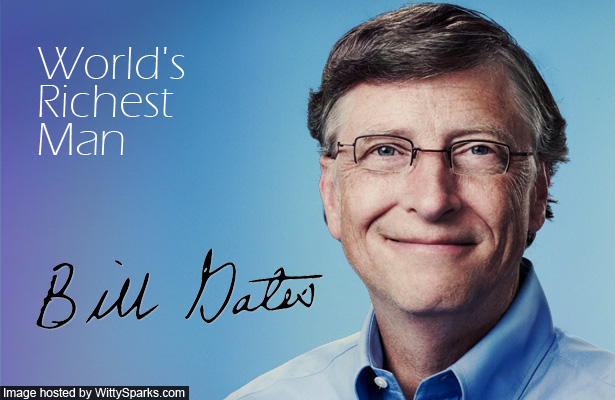 Welcome! Welcome!, welcome back Bill Gates to the world’s wealthiest people, with a net worth of over $55 billion. Gates, the one and only co-founder of tech giant Microsoft, needs no introduction. The superman of tech has regained his title after Microsoft shares, up 28% so far this year, closed at a five-year high Thursday for the second time this week!

Gates, 57, hasn’t been No. 1 on the Bloomberg Billionaires Index since 2007, and his fortune, valued at $72.7 billion, is up 15% year to date. Less than 25% of his fortune is held in Microsoft’s shares, maker of Windows — the world’s dominant PC operating system. This must be an excellent feeling for the world-renowned entrepreneur and role model to many across the globe.

The co-founder of Microsoft remains the company’s chairman. He has donated a significant amount of his fortune( $28 billion) to the Bill & Melinda Gates Foundation, founded 14 years ago. Gates, his wife, and fellow billionaire Warren Buffett operate the foundation, one of the world’s wealthiest philanthropic organizations.

The position was reached because Microsoft’s stock has been tearing and increased Gates’ fortune by $10 billion. Since the start of 2013, Microsoft shares have climbed 28%, despite the struggles the company has been having with Windows 8 – the company’s latest operating system.

According to the Bloomberg ranking, Warren Buffett, 82, who had taken the seat from Gates, is the world’s third-richest person with $59.7 billion. He is worth about $3.7 billion and resides as the chairman and CEO of investing conglomerate Berkshire Hathaway, headquartered in Omaha, Nebraska.

Previous Post: « Vyclone assists in remixing your videos
Next Post: Slide-out or Navigation Drawer jQuery Menus for your next web app! »