You are here: Home / Entertainment / Chak De, Hockey and India 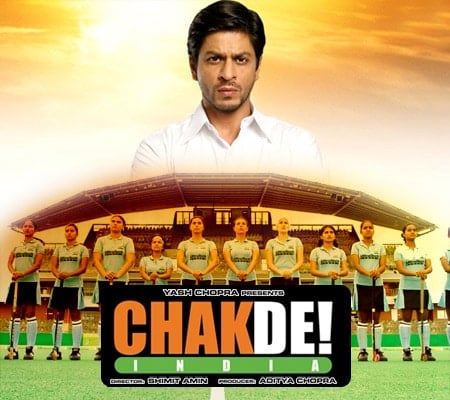 Watching CHAK DE! INDIA, in a theater amidst shouts of cheers and the blowing of whistles, one could get a feel of celebration and some kind of inspiration. Patriotism, the plot, identity, and the love for the sport could have been the many reasons that contributed to the cheers and shouts in the theater.

The success of Chak De India reflects the success of movies that have had sports as the main theme in the movie. An example in this regard could be the movie Iqbal which was also received well in different quarters.

The movie had several themes which carried the plot forward. For those who thought that the movie was all about ladies hockey in India, I would say they just saw the tip of the iceberg, for intertwined with this main strand were the themes of emancipation and empowerment of girls in India and the languishing and corrupt state of affairs of the game. The movie at the start also brought out patriotism for one’s country and the factors which go into molding that patriotism i.e. Media.

The movie is about an individual shunned to obscurity by the nation which is led to believe in his disloyalty by a misconstrued portrayal by the media. The same individual comes back after a gap of seven years and turns around a bunch of ladies and takes them to the zenith of success by winning the world championship of hockey.

This individual represented the country’s national hockey team and was revered by the same nation for his belligerent strategy, and fantastic skills with the hockey stick are played by Kabir Khan got the respect of the nation as a premier hockey player and captain. This individual is Kabir Khan and is played by the suave Shahrukh Khan.

Media could make and break a person– this was proved right at the start wherein a perspective of an individual could become the perspective of a nation by the way it is portrayed by the media, in this case being Electronic media and in specific news channels.

It was the bias of one reporter which brought a barrage of accusations against captain Kabir Khan, something that dubbed him as a traitor. And this is shown symbolically in the movie wherein he undertakes a flight from his neighborhood to anonymity, a neighborhood where he grew and thought had people who knew him and were his friends.

After a recess and exile of seven years, he returns to the scene and seeks to claim retribution and wipe off the “strokes” of traitor that had been smeared on a person who had patriotism in his blood and carried his country in his heart. It was the love for the sport and for his country that led him to the same doorstep which had barred him and branded him years ago, to turn around a bunch of individuals to an effective team!

The movie also reflects the attitude of the governing body of hockey towards women’s hockey. It also takes a dig on the approach of the governance of the body and draws parallels to the IHF which even today is run in an autocratic fashion under the clutches of KPS Gill. The functioning of the body is beyond questioning and hockey which as a sport was at its pinnacle at one point in time languishes today in the country.

The movie also shows the attitude of the multitude towards women and a sport like a hockey. It is a big challenge for women to transcend from the confines of the community and society to take up a sport. Society even today unfortunately continues to be backward in its thinking as far as encouraging women to take a sport.

Kabir Khan takes it on himself the task of introducing the spirit of playing for the nation and ironing out the attitudes of a bunch of individuals. The movie subtly brings out the baggage that players carry with them that pertains to their states and selection politics.

Chak De is about team building and what it takes to succeed as a team. The movie beautifully reflects the different impediments that come in the way of team building such as the attitude of players, their background, and other elements. It then shows the different tactics and means Shahrukh Khan aka Kabir Khan uses to mold them by instilling discipline, pride, and self-respect in the players.

The movie carries different messages through different instances like that of emancipation, team spirit, patriotism, the right attitude, and the main one, We before I.

A must watch for Indians who carry India in their hearts and who believe that hockey could again regain the pristine status that it once enjoyed.

Previous Post: « “Philadelphia Experiment” – a sci-fi based on a true incident!
Next Post: Now Bollywood Movies on Your Mobile Phones »