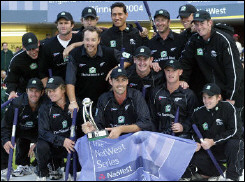 If we want a team that could upset the World Champions and give them a run for their money then it is got to be New Zealand! Probably the most underwritten side in the tournament, the Kiwis are one of the most competitive sides. Known for the sheer depth of talent, it won’t be fair to call their strike bowlers- all rounders!

Their recent performances against the World Champions reiterated the fact that they are a handful on any condition and against any team. Their two 300 hundred plus successful run chase against the Australians have given a fillip to the

hopes and aspirations of the side which would go into the tournament without a key player- Nathan Astle who retired recently. Despite his absence, the team has found

Ross Taylor and Peter Fulton who have shown great promise and have lent solidity to the batting lineup apart from instilling the faith in the team that they can win as a unit!

Strength– Athletic and electric fielding, Allrounders and aggressive approach
Weakness– Lack of experience in their batting line up

A captain who has steered the ship through many a storm with his aggressive batting, he is one of the most respected captains who can marshal his resources through adversity in the coolest of manner and lead from the front with his bat.

A fighter to the core, this middle order batsman lends certain solidity to the batting order. Aggressive by nature he can adapt to conditions easily.

An electric fielder in the infield, he has been used to open the batting order off late with Captain Stephen Fleming. Known to take risks he also plays the role of a pinch hitter at the top of the order.

An all rounder he along with Jacob Oram brings in the variety in bowling and batting. Known to bat in the middle of the innings, he has played the role of anchor man on many occasions.

One of the most experienced left arm leg spinners of our generation, this tall spinner brings a bag load of experience to the team. A decent turner of the cricket ball, he has guile and deceit in equal proportions which makes him a very effective one day spinner! 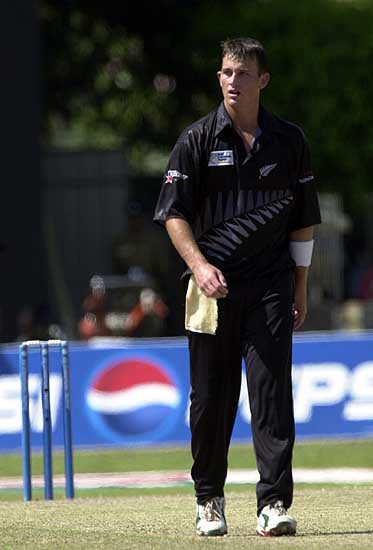 The name’s Bond, Shane Bond! Well, this cop turned cricketer is pace personified which is reflected in the number of batsmen who have fallen prey to his pace bowling. He lends ‘bite’ to the Kiwi attack and has transformed the Kiwi pace attack which was predominantly seam prone in the past decades. Bond bowls at a healthy pace and possess a great deal of control over his bowling which makes him highly effective. Certainly an exciting bowler to watch for!

The Kiwis are tough competitors who would give any opposition a real tough time. A good blend of batsmen, fielders and bowlers makes them a cohesive unit, a unit that is capable of pulling up a surprise even during adversity!