If there is one team which has been unlucky as far as winning the World Cup is concerned, then it is South Africa. Always radiating promise and potential, the Proteas have failed to win the cup despite fielding talented sides in the past. They were a stone’s throw away from winning the cup in 1999 when Gibbs put down the catch of Aussie Captain Steven Waugh and thence lost the semifinal match and the World Cup too!

The team for the 2007 World Cup has a good mix of aggressive talented and experienced players. They also have a good breed of fast bowlers like Ntini, Pollock and Nel who can pose threat to any batting line up in the tournament with their pace and discipline.

Weaknesses– Lacks quality spinners and experience in the batting order

Captain Graeme Smith has emerged as a successful captain who has given the team many successful wins. Opening the innings he is a strong on side player and combines aggressive with some effective batting! 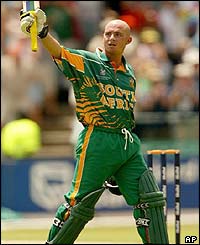 One of the most feared players, he can make a mockery of any total if he gets going. He exhibited his aggression in the famous 300 plus run chase against the World Champions Australia recently and set his team up for a memorable win. A strong off side player and a good puller of the ball, he is blessed with the gift of timing his shots.

Voted the most popular South African Cricketer, this man is full of energy both off the field and on the field. He has troubled many a quality batsmen around the world with his pace bowling. A natural athlete, he is one bowler to watch out in this World Cup.

He is an old warhorse who torments the batsmen with his line and length bowling. He has dropped a couple of yards in pace but his impeccable and disciplined bowling troubles batsmen in the early overs. Experiance coupled with some smart thinking makes him a potent force in the Protean bowling attack.