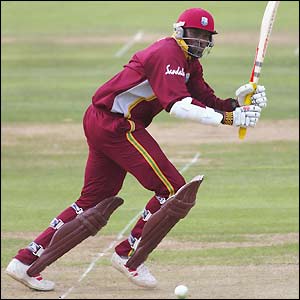 Lara’s farewell party was spoiled by England as they clinched a thrilling contest with one wicket. England chased a mammoth total of 300 runs in the last over with the last wicket!

Batting first the Windies opened with Chris Gayle and Devon Smith and it was a revisit to the late nineties when one opener went ballistic and the other dropped the anchor. In this match, it was Devon Smith who took over the anchor’s role while Gayle became the aggressor after the initial two overs. It was then the Gayle storm that rocked England for a while! He kept finding boundaries at will and played the usual way, the way he knows best- POWER BATTING! He muscled his way through the English seam bowlers and no amount of experimenting could stop this batsman who gave a fantastic display of Caribbean flamboyance and flavor!

Gayle struck 10 boundaries and 3 effortless sixes in his knock of 79 which came off just 58 deliveries! On the other end, Smith looked in no hurry batting patiently at a strike rate of 50, while Gayle maintained a strike rate of over 100 all throughout!

Smith made his half-century and perished a few minutes later trying to up the ante. His dismissal brought Lara to the crease who was playing his last one day international.

Lara looked in ominous touch but was let down again by his teammates as he was run out after scoring 18 off 17 deliveries. Lara’s exit bought Marlon Samuels to the crease who along with Chanderpaul provided the perfect acceleration that the team required at that stage of the game. Chanderpaul hit some timely boundaries and contributed 34 valuable runs which came of 39 balls while Samuels made a blistering 51 in 39 balls. His knock had 6 boundaries and a six!

West Indies posted a total of 299 although I felt that they fell short of 20 runs as the lower order failed to contribute and the team lost momentum in the final stages of the game.

England looked refreshingly aggressive and for a change, it was captain Michael Vaughan who led the charge. He scored quickly and looked in good touch although his partner Andrew Strauss once again failed to deliver the goods. Vaughan scored 79 runs at the top in 68 balls and provided the platform for the team to launch. It was then left to “KP” or Kevin Pietersen to guide the English ship home.

Despite the fact that wickets kept tumbling all around him, he remained calm and ensured that the team never lost sight of the target. He knocked the Windies bowlers around in his characteristic manner and struck a fine century that took the team within striking distance of the target.

But what’s a one-day international without pandemonium?! And there it was, the English team began to buckle under pressure and lost some quick wickets towards the end of the game. The team dug a grave for itself at the end and the only difference from the previous game was that it didn’t jump in it and for a change pushed the opponent in it! The English team might be thanking the heavens for helping them win but I thought it was the extras 22 of them that worked as the “hand of God” for the English!

Either way, Lara’s farewell party turned a bit sour for all the fans who came to see Lara play and West Indies win the match.