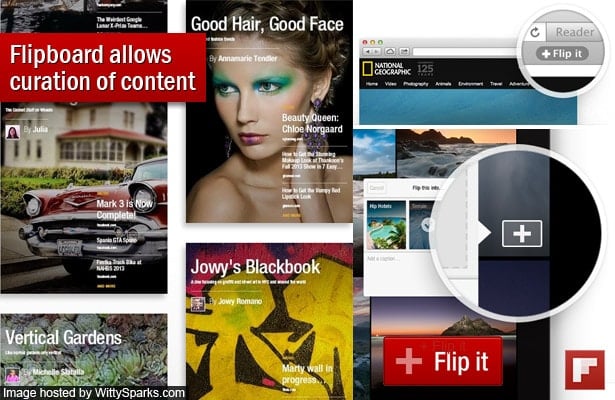 Updates increase the longevity of all good apps; Flipboard has introduced new services to their iOS users, allowing them to organize and make their magazines.

Flipboard has been a leading player in the digital news-consumption field. They are now smartly allowing the users to employ some of the tools used by their editors to create their magazines around topics they love and share them with other users.

This new move is like Pinterest meets Tumblr with the fab-looking and more social version of Google Reader. It is an inspiring recent change for avid users of the app. The Android users will also receive the update on the app soon.

Eric Feng, the Chief technology officer of the app, said, “It’s been more than 18 months since the inception of the idea, so this is a pretty big deal for us. The company has put all efforts into making a thoughtful update on the app; 18 months is no joke! We were originally focused on discovery and filtering of content, but now we are moving into curation in a big way.”;

The update is very user friendly and applies no rocket science; You have to hit the plus button on anything you see on Flipboard – a story, a photo, or any relevant video or sound clip, then select create magazine / “flip it into” and add a title and description.

Once you’re done, anyone can search for and subscribe to your digital ‘zine, and you can look for ones that interest you, too. It is similar to Pinterest in this way, but the auto-generated design of your Flipboard magazine is much pleasing to the eyes.

Flipboard is not restricting its users to content from their app; users can pull content from anywhere on the web because the Flipboard service is also launching a bookmarklet. Content can be brought in from blogs, Twitter, Facebook, etc., and simply be added to the custom magazine created by the user.

The company is trying to target the same curatorial impulse that draws people to Pinterest and Tumblr. Instead of just pictures, every user can make their own magazines on topics and have them accessed by other users.

The new app update will have a section named “By Our Readers,” which will be the magazines created by the users, and based on how many times they have been viewed and shared, they will be highlighted. This will basically organize the most shared user-made magazines and make them easy to browse by others.

This is a new idea, a first-timer in the field that does pose a clear threat to the existing publishing industry since the users will be able to custom-make their magazines with endless information available on the web. The idea, however, is superb; in the tech business, App updates are crucial to maintaining the users’ likeability.

Previous Post: « CheckThis the coolest blogging app for iOS
Next Post: BioAid app will help in hearing via iPhone »