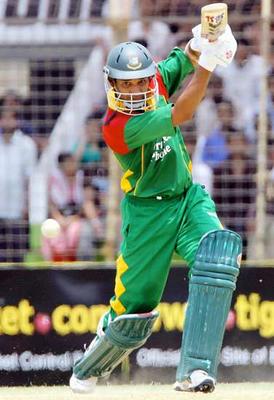 India defeated Bangladesh in the first of the three one day matches at Dhaka by five wickets. The win came as India drew some sort of revenge for the World Cup defeat at the hands of Bangladesh in the round-robin stage that led to its exit from the World Cup. The match turned out to be well contested with its fair share of ups and downs!

Batting first the host got off to a solid start with Tamim Iqbal looking good from the start. He played positive shots and dealt in boundaries scoring six of them. He looked to unsettle the Indian bowlers but fell prey to the part-time spin of Dinesh Mongia who had him caught at the boundary. Iqbal scored 45 from 53 balls and his record against India indicates that he could develop an appetite of scoring runs against the side like Andy Flower, Chanderpaul, and Mohammad Yousuf!

Captain Habibul Bashar got out early trying to up the scoring rate but then the innings was steadied by Sakibul Haan and Javed Omar. Hasan scored a quickfire 50 from 67 balls while Omar played the role of a sheet anchor and scored 80 runs from 117 balls.

He began cautiously and then began to accelerate slowly but could not go the entire distance. Both the batsmen departed in quick succession but even their departure didn’t let the scoring rate slip as Ashraful took charge. He came and scored 29 runs in 22 balls hitting 3 boundaries as the Bangladeshis finished their innings at 250 for the loss of 7 wickets.

India playing seven batsmen looked all set to chase the target with ease. But then with the Indian team, not all has gone as per the script of late! The team opened with the left-right combination of Gambhir and Sehwag. Gambhir played his usual way and got out also in the same manner.

He was good at his pads and scored 3 boundaries before getting out LBW to Rasel. Sehwag for a change appeared judicious in his shot selection and played cautiously. But then he cut loose all of a sudden in a Syed Rasel over and struck four ‘effortless’ boundaries before succumbing to a foolish shot. he made 30 runs and threw away his wicket after getting the start.

Yuvraj Singh came and departed without troubling the scorers too much. He looked ill at ease and departed scoring just 1 run that came from 9 deliveries.

From then on it was all Dhoni. He strung partnerships with captain Rahul Dravid, Dinesh Mongia, and Dinesh Karthik. Dhoni played a gritty knock of 93 runs from 106 balls with 7 boundaries in it. The weather conditions took their toll on the Indian batsmen as they were sapped with body fluids and struggled with cramps.

Dhoni too got injured but showed great tenacity by hanging in the middle and accepting the responsibility. He swam against the tide and played a very ‘, Unlike Dhoni’ innings, an innings that was bereft of his power hits and macho shots!

Dinesh Karthik was the other gladiator who again adapted to the situation beautifully and played a fantastic knock under pressure. He sure has the makings of a good batsman and needs to be on the side for his temperament and skills.

The Indian team looked a bit ‘browbeaten’ at the start but then made up for this ‘lack’ with an experienced display in the batting department. The next match on the 12 of May would certainly be another contest to watch out for as the Bangladeshis would be rearing to have a go at the Indians after today’s defeat!