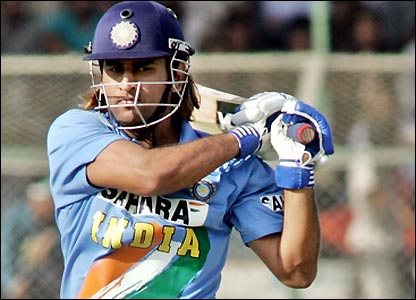 India defeated Bangladesh by 46 runs in the second one day international match today at Dhaka.

Batting first India scored a mammoth 284 runs at the loss of 8 wickets. The centurion for the day was Gautam Gambhir who made the most of the opportunity that was presented to him. He opened the innings for India who won the toss and elected to bat first.

Both Sehwag and Gambhir began cautiously but Gambhir looked the more settled of the two. Sehwag on the other hand was at his mercurial best striking boundaries and fiddling with danger at the same time! Just when he appeared to cut loose, he committed the cardinal sin of succumbing to his ‘impetuous instinct’ that cost him his wicket.

He once again failed to build on the start he got and frittered away a valuable opportunity to cement his place in the side. Having said that, the Bangladeshis outsmarted him and lured him to play shots that would bring his downfall! Sehwag needs to make the most of the next opportunity else he might face dire consequences ahead of the upcoming tour of England.

Gambhir was solid and anything that was on leg stumped was thumped to the boundary with ease. He looked in sublime touch on the leg side with some crafty nudges and pulls and as time went by he asserted his dominance in the offside too by playing some glorious cover drives.

He played the anchor role and was involved in a valuable partnership with MS Dhoni. In the process, Gambhir reached his century and ended up scoring 101 from 113 deliveries. His knock comprised 11 boundaries while Dhoni scored 36 from 54 balls with 4 boundaries.

Dhoni’s exit saw Yuvraj arrive and after a few nervous moments, Yuvraj unleashed some impeccable shots that were a delight to watch. An effortless six off a short-arm jab and some penetrating boundaries indicated that the Indians were ready to accelerate!

But it was then that India again lost the crucial wicket of Yuvraj and then India lost a bit of momentum as both the big hitters in Dhoni and Yuvraj were back in the hut. But even then India managed to post a total of 284, thanks to contributions from Dravid and Mongia who scored 42 and 17 runs respectively along with the extras that came in handy for the Indians.

Any total in excess of 250 was going to be a tall order and Bangladesh realized it well at the start. Even though they appeared to be aggressive, the pressure of maintaining the run rate began to tell on the batsmen who showed signs of anxiety. The first batsman to fall was Tamim Iqbal who got involved in a horrible mixup with Javed Omar and was run out for 7.

Omar himself departed soon after having scored 11 runs. The innings was held together by Aftab Ahmad for a while but the Bangladeshis began to fall behind the required run rate and in a bid to increase the run rate lost the wickets of Ahmad, Ashraful, and Sakibul Hasan.

The hosts could only end up making 238 for 9 in their allotted 49 overs. The day belonged to India with the bowlers to put up a fine display. Spinner Piyush Chawla picked up 3 wickets while Yuvraj Singh and Zaheer Khan picked up 2 each.
With this victory, India has sealed the series and all Bangladesh has left now is to play for their pride.