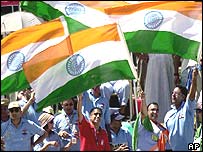 The comments I received for the last post confirmed that cricket indeed dwells in the hearts of people across this country! But unfortunately, the truth is bitter and the truth is that the Indian team is ill-equipped to match the South Africans in their backyard. They capitulated like a pack of cards in the first game and put on a similar performance in today’s match.

Having set a total of 275, the entire team was wrapped up at 161. Electing to bat, the South African team was in all sorts of trouble with Zaheer Khan drawing first blood in the very first over with two blows. This downfall continued and at one point the Proteas were 76-6.

As the saying goes that adversity tests the true charactar of champions, this was proven right by the home team which strung a couple of partnerships and ensured a total of 275 was posted. In the process, the Indian bowlers were belted mercilessly in the final overs when each of them conceeded an average of 10 runs an over.

The display of the Indian bowlers in the last ten overs gave a clear indication of what alien conditions mean to them. They sprayed the

ball on both sides of the wicket and failed to bowl yorkers which gave the batsmen enough opportunity to score. The experienced Ajit Agarkar and Zaheer Khan failed to apply themselves and bowl cleverly and eventually paid a very heavy price for their follies. Even Harbhajan Singh went for plenty and it rained runs !! 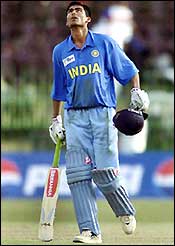 Any total in excess of 250 was going to be an uphill task for the Indian team. It meant that the team’s batting order had to click and one batsman had to play through the innings. But as one could have predicted Indian openers departed quickly and the same sorry tale began to unfold- one of helplessess.

The only positives for the Indian

team were the innings of captain Dravid who again lived to his reputation of being the best batsman in the team with proper technique. Dhoni for a change fired today and I felt the limelight shifted from his hair, style, and fashion to his shots and cricket after a long time!

Rahul Dravid in this tour will be like a beacon, a lighthouse withstanding the storm. The thing to be seen is how far is this lighthouse able to show the way to the Indian ship which seems to be in a Bermuda Triangle, devoid of hope and faith.

With 2-0 down, the series is as good as over for the Indians. The only consolation would be to see how much pride the Indian team salvages in the reamining series and can it stand up to the challenge in the remaning matches?