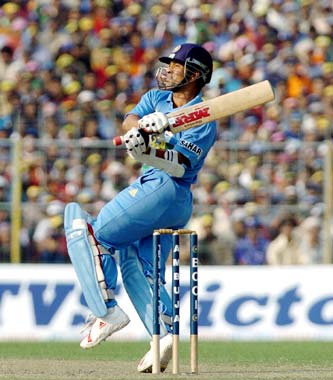 Indians came up with a spirited performance and were helped by the conditions and a buoyant and refreshing Sachin Tendulkar as they trounced South Africa in the second one day international.

Winning the toss, captain Rahul Dravid sent the South Africans to bat as the conditions looked apt for seam bowling. The Indian team got a couple of early breakthroughs as the Proteas lost two early wickets of AB de Villiers and Captain Jacques Kallis cheaply.

It was then up to M Van Wyk to do the rescue act as he played some powerful short-arm pulls and cuts on the offside. He steadied the South African ship and scored a well-compiled 82 runs that came off 126 balls. He got some good company from Gibbs and Duminy who scored 17 and 40 runs respectively. In the end, it was Boucher and Hall who helped the South Africans reach a score of 226 runs at the loss of 6 wickets.

The Indian bowlers bowled well and contained the South Africans successfully with some wily spin bowling from Yuvraj Singh whose left-arm spin came in handy. He also scalped three South African wickets. Among the seamers, Zaheer Khan was fantastic with his spell of 9-2-29-1.

Then came the Tendulkar storm that took the spectators, commentators, and viewers across the world by surprise. For a moment, I found the same touch in his batting, the spark that had gone missing in recent times. He looked fit, aggressive, and had feet of quicksilver!

There was a certain sense of urgency in his batting and his shot selection was impeccable. The drives kept flowing and the pulls on the on side were emphatic, to say the least. His cricketing genius was reflected as he took different approaches to the bowling of Andre Nel, Ntini, and Langeveldt.

The true bounce of the wicket helped him in playing his shots with authority as he slammed the young spinner Tshabalala for 13 runs from one over. Sachin scored 93 runs and his knock had 13 boundaries and two towering sixes.

However, things were not meant to go smooth for the Indians as they lost some quick wickets in the forms of Ganguly, Dravid, and Dhoni in the middle overs. Ganguly looked completely out of sorts and it appeared that he was struggling to get bat on the ball. He played and missed endlessly and it was just a matter of time before the South Africans got the better of him!

Indians were guided home by a cumulative effort of Yuvraj Singh and Dinesh Karthick. Yuvraj played a very mature and sensible inning realizing that there was no batsman to follow after the pair.

He got his bearings in place and then took charge as he struck boundaries and sixes at crucial junctures. His knock of 49 runs had 4 boundaries and a six while Karthik scored 32 runs from 37 balls.

Watching Sachin bat today reminded me of those days when he would bat as a gladiator piercing the off-side boundary with his flawless cover drives and quick running between the wickets.

He gave a similar glimpse of the same today as he took an aggressive stand and gave a befitting reply to the short balls of the South African bowlers. His purple patch is a really ominous sign for the Indian team which has a long tour of England ahead of it!