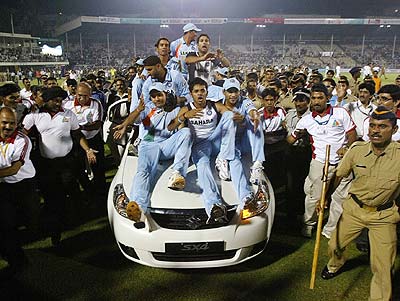 India, after being humbled in the recently concluded one-day series by World Champions Australia, came out with a stellar performance in the one-off 20-20 match on Saturday and defeated them comprehensibly by 7 wickets. With this, they extended their undefeated run from the 20-20 World cup and reiterated their dominance on this format of the game.

For many, this victory came as a soothing balm to apply over the wound leftover by the series loss at the hands of the Aussies while for the multitude it was the last laugh & a divine providence of sorts!

The Aussies batted first and set a total of 167 runs which by their standards was certainly low, given the comfortable margins with which they had vanquished India in the concluded one-day series. But the unpredictable nature of the game came as a leveler and the tourists ended up mustering up 166 runs at the end of their 20 overs.

They faltered at the start losing slam-bang Gilchrist and Haydon cheaply. While Gilchrist was castled by RP Singh for a score of 12, Haydon was mesmerized by the turbanator for 17. The twin blows dented the scoring rate of the visitors to some extent, but then with the depth in the batting they had, it was expected that rescue in some form would come.

And it came in the form of their captain Ricky Ponting who not only dropped the anchor but also made a valuable contribution of 76 runs. His knock included a whopping 13 boundaries and came in a good time of just 53 deliveries. He was assisted by contributions from Clarke and Symonds.

But on the whole, one could feel that the Aussies fell short by some 30 -40 odd runs clearly, a deficit which proved too costly for them at the end of the day. Thanks to the impressive performance by Harbhajan and Murali Kartik, India was able to restrict the Aussies despite a ‘not too impressive’ performance by the seamers who were taken to the cleaners by Skipper Ponting.

Having been set a target of 167, it was expected that the Indians would achieve it comfortably. But the aggressive and dominant way in which they humbled the total hurt the tourists even more. Despite losing Sehwag early in the innings for a total of 5 runs, the Indians kept the momentum going.

This was made possible by their 20-20 specialist ‘south-paw, Gautam Gambhir who set the match on fire! Gambhir went on the rampage from the word go and made the most of the inconsistent of the Aussie bowlers. He scored a quickfire 63 runs from just 52 balls, a knock that was studded with 6 boundaries and a six.

What was refreshing in the knock was the disdainful treatment of the Aussie bowler, a reflection of which could be found in the boundary off Bracken where he hit him over his head!

Gambhir got good company from Robin Uthappa and Yuvraj Singh. Uthappa scored 35 off 26 balls while Yuvraj scored 31 from 25 deliveries. He punctuated this knock of his with 3 towering sixes and a boundary amassing 22 runs from boundaries! The winning runs were scored by Dhoni who smashed a six off Brett Lee to salvage some lost pride.

Following the humiliation suffered from the defeat in the one-day series, India had finally some moments to savor and some consolation to take back.