Indian cricket team finally pulled off a performance as a cohesive unit and achieved the unachievable– defeating the proteas in their own backyard for the first time in four tours! A fanstastic achievement indeed..!

What was heartening to see was the spirit and the pride shown by the players on the field. From Sreesanth to Ganguly each player showed nerves of steel and put on a awesome performance. This victory had a semblance to the victory in the test match over the Australian team when India toured Australia last time. 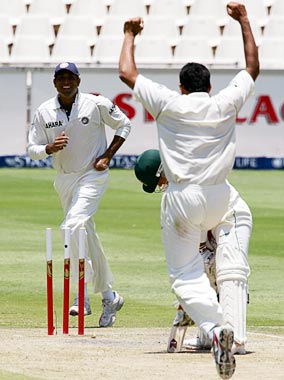 Grit, perseverance, discipline and application were the ingredients which went into the making of the recipe -VICTORY! As I had mentioned in my previous post, the team had failed to apply themselves to the conditions provided to them and as a result had faltered in the one day series. But the heartening element after the one say series was their regrouping and bouncing back as a unit!

Indian batting for a change showed character and resilience.
Despite initial hiccups the middle order contributed with some

gritty knoks from Sourav Ganguly who made his comeback in an emphatic manner with an unbeaten 51 runs along with contributions from Tendulkar and Dravid! VRV Singh’s burst in the innings at the end was a delight and was it was nice to see someone take the fight to the opposition! 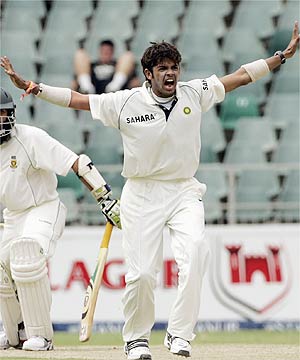 The bowlers really put up a brilliant performance. Lead by the young Sreesanth who picked up 8 wickets for the match, they maintained a tight line and length and made the batsmen commit the mistakes. It would be fair to say that they bowled India to victory! It was some sight to see South African wickets fall one after the other like a pack of cards. And in just 25 overs the entire team was bundled for a paltry score of 84 in their first innings.

Wasim Jaffer failed again as the Indian team lost his wicket early in the second innings though Sehwag went about his natural way and played a flurry of strokes before perisihing at the start. Then it was upto Mr. ‘Very Very Special’ Laxman to make his mark. He did the same with his classy stroke play and made a ecclestial 74 as he steadied the Indian ship with contributions from Tendulkar, Ganguly and Zaheer Khan. The Indian team set a target of 402 for the South Africans in the second innings. It was a pleasure to watch the sheer elegance and elan with which Laxman hit his boundaries. His straight drive with a mere flick of wrists for a boundary was a delight for the fans watching and had ‘grace’ written all over it! 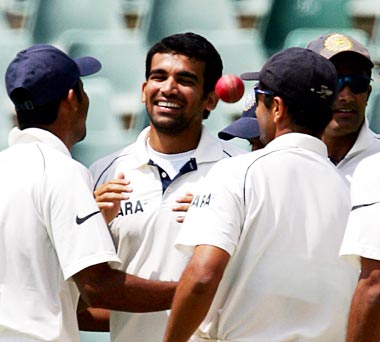 Then it was the turn of the Indian bowlers who came back with lot of fire in their belly and removed three wickets by the end of the day. The next day, Sreesanth, Zaheer Khan and Anil Kumble with some clinical bowling display dismissed the entire South African team and wrapped the match in a emphatic fashion!

There were celebrations in the Indian team’s dressing room as the players jumped around in joy. And why shouldn’t they, they came from behind and amidst all sorts of accusations did a David act against a Goliath !

India’s stellar performance made me recollect a quote of Winston Churchill-” kites rise highest against the wind , not with the wind!”
Well done India.. keep it up!…