You are here: Home / Sports / Indian team before second test at Sydney… 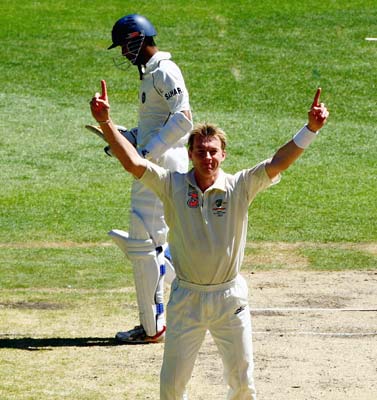 India suffered a humiliating defeat in the first test against the Aussies. The defeat showed that not much has changed when it comes to India’s miserable performance on overseas tours. The upbeat mood after a good season back home seems to have suffered a dent and the team has a lot of introspection to do before the second test starts in Sydney.

Sunil Gavaskar once commented that the Indian team takes time to adjust to the foreign conditions and by the time they adjust, the tour is already over! Very true and it appears to be the same story unfurling this time.

The Indians went with a dilemma, a conundrum that has bothered them for quite some time now- Opening pair. With Virender Sehwag struggling to get his bearing sorted out, the selectors were left with few alternatives. Karthik looked out of sorts in the previous test series towards its latter half.

I would have liked Aakash Chopra to open with Wasim Jaffer because I always felt that an opener’s role is a specialized one. The mindset of an opener is different from that of a middle-order or lower middle-order batsman, which makes it important to pick the right person for the job. Chopra fared reasonably well in the previous tour to Australia where he saw the new ball off and dropped the anchor for the team.

More importantly, he along with Sehwag dented the psyche of the Aussies by denying them the wicket at the start which went a long way in the team doing well. What is important for the team batting in a test match is a good start and in this light, it becomes imperative for the openers to ward off the danger from the new ball and see through the initial hour or two.

Rahul Dravid being promoted to open is not a bad move but for a batsman like him who has done so well in the number 3 slot, it is unfair to burden him with the responsibility when he is at a low ebb. The team man that he is, took up the job but the selectors should have thought a little more objectively.

The bowlers did a reasonable job although the pace battery needs to pull its bootstraps. The spinners did a wonderful job and captain Kumble lead from the front.

Mindset is the key when a team plays in Australia. Battles are fought in the mind more than on the field and in this light, it becomes important for a batsman to be mentally tough to face the challenges thrown at him.

The team did not lose the battle on the field in the first test match, it lost it in the mind. The batsmen gave up after getting starts and against a side like Australia, it is a sin and a crime!

The Indian team does not have much time after the first test and this would mean some quick adjustments to be made before the second test gets underway. At the top, the opening slot would need to settle down and from the team’s think tank strategy, it looks apparent that it would be Rahul Dravid to open. What is to be seen is his partner, whether it is Jaffer or the ‘Mecurial’ Sehwag.

Australia is a team that plays like a cohesive unit and it is not easy to beat them in their own backyard. To do so, would require strong team performance, grit, and resolve rather than lagoons of brilliance, something that the Indian team and players are used to!