Finally the Judgment day has arrived in this World Cup. The showdown between two former champions for which they have been eagerly waiting for almost a month’s time! Tomorrow on the 28 of April, two cricketing giants Australia and Sri Lanka and will clash for the Cup in what is being anticipated as a Clash of the TITANS!

Australia would look to carry forward their winning stretch and win the Cup for the third time in a row and create history. West Indies tried to do that by winning it in 1975 and 1979 but they were halted by India in 1983. If the same logic is used then Sri Lanka, another former champion from the Sub continent should end up spoiling the party for the Aussies. But the form that Australia is in, it looks tough!

They are the only team in this competition to have had a 100% win record. They have performed as a team in all departments and have a side that looks virtually invincible. But having said that, no team has challenged or stretched the Aussie team till now. No team has put the World Champions under any pressure as a result it has been a cakewalk for them.

Their batting has struck some good form with Hayden, 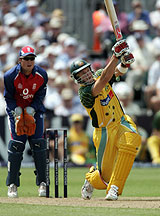 Ponting, Symonds and Watson all scoring runs. Haydon and Ponting look in fine knick and if one of them arrives at the party, then it would mean a tall total for the Lankans.

The weak link for me in the Aussie batting order would be their middle order which has not been exposed to pressure till now. Michael Hussey

and Bradd Hodge have not spent quality time in the middle as has Symonds. So, if the side loses quick wickets at the top, the match could become exciting. With Lankans playing Murali, he could make the batsmen dance to his tunes with some foxy off spin coupled with the doosra. 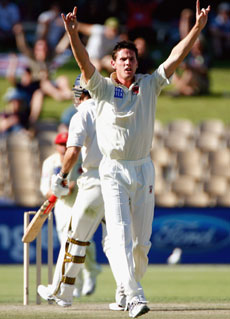 The bowling has looked awesome with ‘Pigeon’ McGrath striking some crucial blows at the top in the big games! He has been able complemented by Shuan Tait who’s performance has looked patchy with regard to his economy rate but his pace bowling is the one that has brought him and the team much success. He has brought in the element of fear with his fast pace, swing and yorkers that has beaten many batsmen in this tournament.

Another advantage which the side has got is the spin options. There are players like Clarke and Symonds who can roll their arm and bowl some effective off spin apart from the regular spinner Brad Hogg who has looked in some great form. His wrist spin has proven effective and even now batsmen fail to pick up the chinaman delivery of his!!

Sri Lanka has everything that is required to upset a team like Australia. Their team is well balanced, they have a good batting order that has produced runs and their bowling attack has depth. So, in terms of the respective departments they are evenly matched with the Aussies.

The team hasn’t had regular performers but every time some player has arrived to the party in the side. If it was 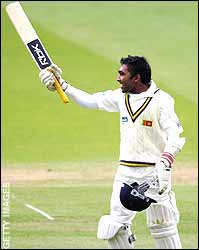 Tharanga on one occasion then in the Semi finals it was Jayawardene who took on the mantle of scoring runs. All the batsmen have on one ocassion or other scored runs so it would proper to say that they are amongst runs. But to point the needle at one or two batsmen for tomorrow’s encounter would be difficult. My man for sure would be Mahela Jayawardene whose form has begun to peak at the right time. One cannot rule out the like of Jayasuriya, Tharanaga or Sangakkara for that reason. It could be any one of these batsmen scoring tomorrow although the chances of Sangakkara making it big are more, owing to his technique and temperament.

The bowling department has been led by two pacers- Chaminda Vaas and Lasith ‘viper’ Malinga! Vaas has created trouble with his swing and Malinga with his pace. Frankly, world cricket needs more Malingas, Shane Bonds and Brett Lees to make the game more exciting to watch. Malinga’s unconventional action has made it difficult for the batsmen to pick him up and given the right conditions, he could be unplayable on his day!

The spin department has the evergreen Murali who would look to create trouble for the Aussie batsmen with his spin. If the wicket ends up being a dry one, then Murali would be more than lethal with his turn and bounce on the surface.

The toss will be vital for both teams as the conditions could govern the fate of the game as we saw in both the semi-final games.

Both sides are well placed for this final showdown and I feel Australia would have a slight advantage going into this match with the experience of handling pressure. But one cannot rule out the Lankans who can give the Aussies a run for their money on any day.

All in all- the judgement day cometh on 28 April.. so don’t miss it!