In a crucial encounter in Grenada, a charged New Zealand side humbled a timid South African side to book its place in the semifinals besides Australia. 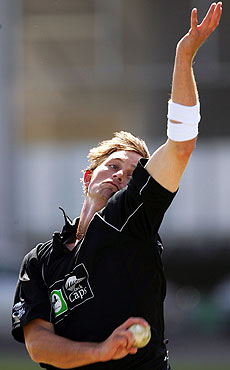 Batting first the South Africans were choked from the start by Shane Bond who bowled immaculately. His precision rewarded him with the wicket of captain Graeme Smith who was foxed with a slower delivery by this paceman and holed out to extra cover scoring just 1 run. AB de Villiers too was dismissed cheaply by James Franklin as he was caught in shuffling no man’s land and was ruled out lbw.

It was then up to the partnership between Jacques and Herschelle Gibbs to rescue the Protean ship. The two batsmen played very much unlike themselves in the situation. They saw off Bond who ended up with fantastic figures of 10-2-26-2 in his allotted overs.

But even after Bond finished his quota, the batsmen could not unleash their strokes and were tamed by some slow spin and military medium bowling.

Jeetan Patel and McMillan bowled extremely well to vaporize the acceleration and impetus in the middle overs by picking some crucial wickets. McMillan’s spell was crucial for he as a part-time bowler struck gold by picking the prized scalps of Prince, Boucher, and Gibbs thereby eliminating the acceleration element completely. In the end, the Proteas ended up scoring 193 -7 in their allotted 50 overs, a total that was clearly short by 30- 40 runs. 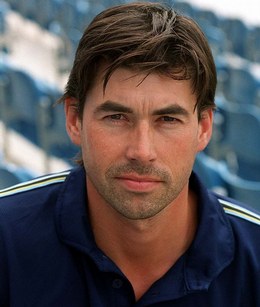 of the situation all throughout. Despite losing early wickets, half-century knocks by “iceman” Captain Stephen Fleming and Scott Styris ensured that the team romped home in the 49th over with 10 deliveries and 5 wickets in hand. McMillan too joined the party by scoring a valuable 38 from 55 balls with the bat apart from his magical and useful spell of bowling.

The loss leaves South Africa at a crossroad with its match against England proving to be a decider for the fourth place in the semi-finals.