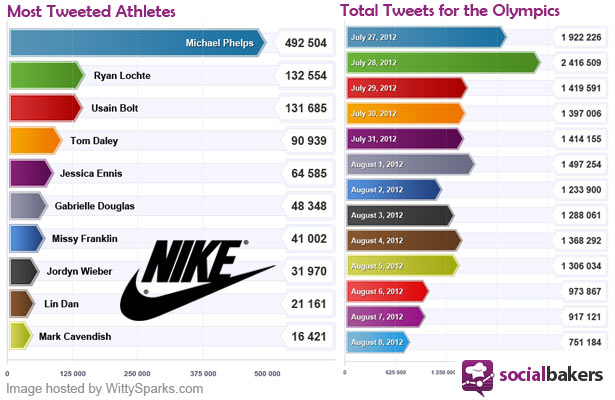 Social media has given a new way for brands to compete! It’s not only the customers’ preference but also the number of fans on Facebook, Twitter, and other social networking sites. This has been enhanced by the Olympic Games, which required sponsors from the world’s leading brands like Nike, Adidas, and others. In such a situation, it would be impossible to declare a winner.

But to solve this problem, some brilliant people have come up with Socialbakers launched in March 2010 to evaluate such results of competing brands. This unique site allows brands to measure and compare their progress with time. Socialbakers.com has been the most visited site for Facebook, Twitter, and LinkedIn statistics.

With the beginning of this year’s Olympic Games in London, the brands got an opportunity to trace their status among people through Socialbakers. In fact, it is through this that Nike realized that it is topping the list with 166,718 fans on Facebook, while Adidas lagged with only 80,761 fans. While this was the case on Facebook, Twitter too had similar stories to tell.

Nike had as many as 16,020 tweets related to the Olympic Games against 9,295 Olympic-related tweets of Adidas. Talking about other brands, Mars was better than Cadbury in the Twitter field.

While Mars boasted off over 29,740 Olympic-themed tweets, Cadbury had only 2,232 of them. Although the Olympic Games have ended with a grand closing ceremony, the top position’s war continues among these brands. For now, let’s conclude this article by congratulating Nike for achieving the top position!

Previous Post: « London Olympic Games come to end with an Entertaining Closing Ceremony!
Next Post: The Twilight Saga – Breaking Dawn or Breaking Up? »