After watching yesterday’s encounter between England and South Africa one could clearly say that the English assiduously dug a deep grave for themselves and jumped into it without any hassles! An encounter that was being tipped to be an interesting one turned out to be one of the most one-sided games of the Super 8 round. Having said that, all credits must go to the South Africans for the way they carried themselves on the field- positive all the way through. 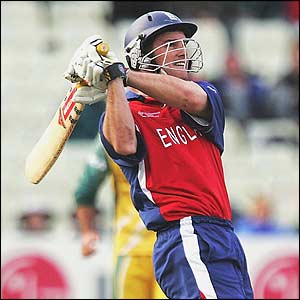 England batting first, dropped the anchor from the start and did not get the momentum to make use of the powerplay. Michael Vaughan took 17 deliveries to get off the mark while his partner Ian Bell too looked relaxed. The Proteas took advantage of this approach and choked them further by bringing on Shaun Pollock who bowled some fantastic miserly spells that built up the pressure in the English camp. This yielded the wickets of Vaughan who scored 17 in twice the number of balls while Bell could just make 7 runs.

Andrew Strauss made a healthy 46 but then threw away his wicket after he had got a good start. This has been his problem in the one-dayers and something that he would need

to work on! At 111-3 the side looked in a solid position heading for a 275 total but who knew that pandemonium was about to set in! The team lost wickets like beans from a can and capsized from 111-3 to 121-8, something from which they could never recover. Their tormentor this time was Andrew Hall who took four quick wickets from similar deliveries. His scalps included Collingwood, Andrew Flintoff, Paul Nixon, and Sajid Mahmood. Seeing the dismissals of these batsmen I could find a complete absence of cricketing acumen for the deliveries to which they got out were the same!

Ravi Bopara then stuck around for some time and has given enough evidence that he should bat up the order. His knock helped a tottering English side to reach a total of 154 runs in 48 overs.

South Africa came out as if they had to board a train! Firing from all cylinders, the two openers gave them a fabulous

start. AB de Villiers was particularly severe on anything outside the off stump and hit boundaries at will. On the other hand Captain Graeme Smith too joined the action with some well-hit boundaries as he reached his fifty in fine style. De Villiers was the only wicket to fall as the South Africans cruised home in the 20th over scoring at about 7 runs an over.

The English team never exhibited nerves of steel in the match and even in the Super 8 league, it was among the weaker sides. It did not deserve a place in the semis and the loss to South Africa justified this even more!