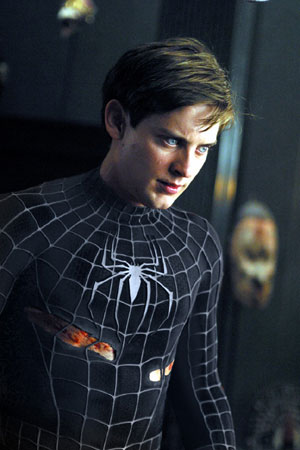 Spiderman 3 has set new records at the box office emerging as one of the top-grossing movies in 2007! But what makes this movie a sought-after affair? Is it plain graphics, stunts, and animation or a plot that relates to the viewers at some level or other? Either ways director Sam Raimi carries the Spiderman saga ‘one step forward in this movie by interweaving the heroics of Spiderman with the emotional ‘warp and woof’ of Peter Parker’s life.

Spiderman, a superhero is human at the end of the day and is bound to suffer. Despite being ‘endowed’ with superpowers, he is helpless when it comes to emotional bondings and ego. Director Raimi uses this basic ‘truth‘ of nature and creates a plot that showcases an emotional roller coaster that develops the plot in a gripping fashion!

In the process, the plot reveals two villains, Sandman- a victim of circumstances played by the macho Thomas Haden Church while the other is Venom– some sort of a creature that requires a host and acquires and amplifies the ‘dark’ attributes of the host, Topher Grace.

The opening sequence of the movie cleverly acts as a recap of the earlier Spidey movies and sets the platform for Spidey 3 to launch. Peter Parker aka Spiderman is happy, in fact, overjoyed saving the denizens of New York from danger and enjoys all the limelight the city showers on him.

Being the ‘protector and messiah‘, he is given the key to the city by the beautiful Gwen Stacy played by Bryce Dallas Howard.

The movie also introduces Mary Jane, Peter’s girlfriend oscillating between lack of attention from Parker and her own struggling theatrical career. She finds ‘Spiderman’ taking a toll on her relationship with Peter Parker. The misery is further compounded by Harry Osborne aka James Franco who rises on the ‘ashes’ of his father by enhancing his gadgets to seek revenge from Spiderman.

The leeward trend of the romantic liaison between Peter Parker and Mary Jane introduces Gwen Stefany who too falls for the antics and daredevil endeavors of Spidey and gets ‘kissed’ by him. The ‘kiss’ which Mary Jane thought was reserved for her is given to Gwen by Spiderman bereft of romantic strings! The director cleverly uses the various emotional battles involving his girlfriend Mary Jane and friend Harry Osborne to carry the plot forward.

The introduction of Gwen Stacy reveals another sub-plot-the relationship of Eddie Brock aka Topher Grace with Gwen Stacy. It is the ego that transforms as power comes by and the same happens to both Parker and Eddie Brock aka Venom. Initially, Peter Parker is consumed by the power and success that Spiderman brings through.

This arrogance is amplified by ‘venom’ which in reality is his ego getting amplified. But for Parker, his conscience wins over this venomous transformation and he becomes his true self. The same although does not happen to Eddie Brock who seeks revenge from Peter Parker for ruining his love life and career.

This leads Eddie to submit to his ego and the same coupled with venom transforms his intentions as he turns into ‘Venom’. He becomes an individual who is ‘consumed’ by the venom of a vendetta that supersedes virtues such as forgiveness and goodness.

The end has some tag team action high flying action with the characteristic Spiderman web spin as Harry Osborne comes to the rescue of Spiderman who is cornered by Sandman and Venom.

As a happy end cannot allow heroes to be victorious, Harry Osborne sacrifices himself for the main protagonist to live and carry the saga forward. Venom is vanquished and in the process perishes Eddie who fails to detach himself from his ego!

‘With greater power comes greater responsibility, this truth dawns on Parker as he realizes the dark side of being powerful and letting power dominate the real self. Raimi with great finesse harps on the psychological and emotional ups and downs that individuals experience and extend that same to the sphere of a superhero like Spiderman. The biggest challenge of a powerful person is the right use of his power and even the most virtuous of people can go astray succumbing to it, this is what the movie tries to delve into.

Spiderman 3 is more of an emotional drama which deals with the human behind the Superhero who is placed in real-life situations. If one compares this movie with its predecessors then they would find it to be a let off and would certainly feel disappointed on the stunts and animation front as Spiderman 3 has action but in bits and pieces like some chocolate chips inside a cookie! It has more to do with emotions and melodrama as against slam dunk action which fans got to see in the earlier Spidey movies.

But the resounding success of the movie illustrates that the human side of a superhero is acceptable indeed!