Sri Lanka beat New Zealand in the semi final at Sabina Park, Jamaica, and entered the finals where they would meet either South Africa or Australia.

Sri Lanka right from the toss got things going their way! It was a good toss to win and under dry and sunny conditions, the Sri Lankan captain chose to bat, a decision that came good in the hindsight!

The two openers began a bit cautiously and for a change, it was Tharanaga who looked the more settled of the two. Jayasuirya on the other hand had been dismissed for low total in bg semi-finals and finals in the past. And despite this setback, the team had gone on to win the matches! The same happened in this clash, Jayasuriya was clean bowled by a fullish Franklin delivery as he tried to play across the line.

Sangakkara who came at Jayasuriya’s dismissal too looked tied down and perished after scoring just 18 runs that came off 42 deliveries! But after his departure, it was all the Mahela Jayawardene show!

The Captain arrived at the crease with the score at 111-3 and from there he led the charge. He began slowly and cautiously scoring 2 runs of 17 deliveries at the start. But once he settled down, he accelerated at a fantastic rate by running singles and hitting boundaries. His six off Jacob Oram was a class act, hit with a certain degree of elan and ease that announced his arrival at the crease.

From there on, he strung some valuable partnerships with Chamara Silva and Dilshan both of who scored quickly and helped Jayawardene reach his Hundred in style. Mahela reached his hundred by hitting a boundary, a reflection of the innings he had played! He hit 10 bouandaries and 3 tall sixes in his knock of 115 that came of just 109 balls as the Lankans finished the innings at 289 for 5.

The Kiwis looked ‘all at sea‘ when they came to chase as the conditions had changed dramatically since morning. The dry and sunny weather had given way to overcast and murky conditions which were aptly suited to seam and swing bowling! And the Lankan strike bowlers Vaas and Malinga made the most of it, particularly Malinga.

Lasith Malinga’s first spell was one of the most memorable spells of bowling in this World Cup. He bowled with fantastic accuracy and pace as he ‘bamboozled‘ the batsmen with his away swinging deliveries that were as good as ‘leg cutters‘!

The Kiwis found the going tough and the first to perish was Captain Fleming who fell prey to Malinga and was given out LBW. He was replaced by Ross Taylor who was all ‘smiles‘ when he faced Malinga! He could not read the swing and found himself in a helpless situation sitting like a duck waiting to be shot!

He too was dismissed by Vaas LBW and that brought the 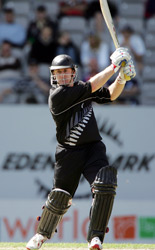 Kiwis unders some form of pressure. His dismissal brought Scott Styris to the middle the ‘torchbearer‘ of the dwindiling Kiwi hopes! And Styris did carry the baton successfully for the time he was in the middle. He along with Fulton put on a partnership that saw the Kiwis reach a core of 103-3 in their 20 overs. He played aggressively scoring boundaries and hitting some towering sixes in a bid to make to the most of the powerplays. His six of Muralitharan was a treat to watch as he took apart Fernando who went for 20 runs in one over!

But then the pressure and reckless approach cost Styris his wicket as he perished trying to be a bit too ‘aggressive’ and his wicket triggered a much anticipated Kiwi collapse. The team could never keep up with the ‘asking rate’ and lost wickets of somekey batsmen like Oram and McCullum cheaply to bury themselves!

The Villains for Kiwis

New Zealand looked a ‘rusty’ unit on the field with injury concerns plaguing a few players. They had a weak link in Jacob Oram who was rendered ineffective by the conditions and the Lankan batsman. Also the Kiwis bowlers didn’t look in good rhythm and were led down by their strike bowler Shane Bond who led from the front in this shoddy display!

For me Shane Bond was the ‘hero turned villain’ for the Kiwis, as he failed to bowl accurately and kept spraying balls both sides of the wicket. He failed to pick up early wickets and let the Lankans get off the hook. This failed to create any sort of pressure on the batsmen who scored freely! The defining moment for me was the drop catch of Jayawardene by Bond who virtually dropped the World Cup for his team. Jayawardene went on to score some 30 odd runs which boosted the score to 289.

Sri Lanka deserved to win the match whereas the Kiwis failed to break the jinx of reaching the finals of a World Cup, having been in the semis for 5 times! They looked a ‘tired’ team, sagging and drooling under its own weight. Plaugued by injuries and loss of form, they just did not deserve to be in the finals. In the end it was a good contest!

The defeat saw Stephen Fleming calling it quits as the One Day Captain of New Zealand, a brilliant and astute leader making way for some young blood.

Well done Sri Lanka, see you in the finals!