You are here: Home / Media / Terrorists strike again in the Indian heartland. July 26 2008 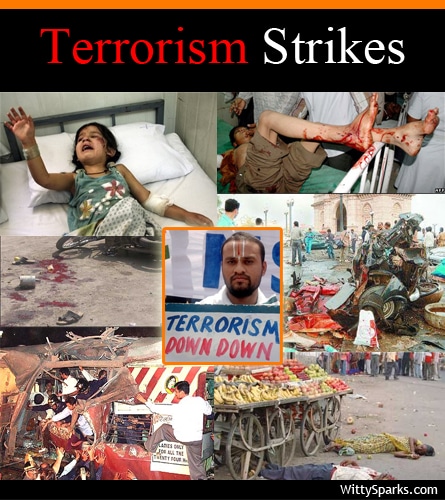 A series of explosions ripped apart Bengaluru and Ahmedabad’s cities in successive days to leave the nation in a state of shock. The blasts were similar in their nature and were executed similarly.

The first series happened in Bangalore, which in the past had been witness to attacks at IISC and blasts too. On 25th July 2008, 7 Serial bomb blasts rocked Nayandahalli, Madivala, Adugodi areas of the city, killing one woman and injuring several others.

The Intelligence agencies suspect that organizations such as SIMI and LeT could be behind these attacks. The attacks in Bangalore were followed by a series of attacks carried out in Ahmedabad on July 26, 2008, of which 45 persons.

This is not the first attack of its kind but one in the line of many that have taken place in the past few years. Orchestrated and planned to perfection, such attacks in Indian cities have killed more than 140 people in the past year in the form of bombs strapped to bicycles, hidden under cinema-hall seats, and near market stalls. While the government typically blames foreign-trained terrorists, most of the attacks are unsolved.

Chronology of recent blasts in the nation:

October 2007: 2 killed in a blast inside Ajmer Sharif shrine during Ramadan, in Rajasthan.

February 19, 2007: Two bombs explode aboard a train bound from India to Pakistan, burning to death at least 66 passengers, most of them Pakistanis.

March 2006: Twin bombings at a train station and a temple in Varanasi killed 20 people.

Even after the series of blasts that have rocked the nation now, the security systems appear to be clueless about when and where such condemnable acts occur in the future. Going a little deeper, one wonders why India is a target of such attacks, the ideology, and the organization which is organization masterminding these attacks?

Well, questions are many, some of them mired in cobwebs of speculation but with a watermark that has undertones of vendetta and reeks of vengeance. Recently, while browsing through some news articles, I came across this line of thought which spoke of ‘Indianisation of Jihad,’ which talks of resentment about different issues such as judicial verdict against Jihadis involved in Coimbatore blasts and Mumbai blasts, the severity of criminal justice against Muslims involved in these terror acts and others alike.

SIMI’s role (Student’s Islamic Movement of India), which is banned, has surfaced time and again. Despite clamping on their movements, they have managed to stay afloat with ISI assistance, which aids them through training in making bombs and other explosive devices.

The sad part of this entire terror episode is that it is the involvement of Indian Muslims to carry out the disturbing attacks. ISI stands clear of any involvement of Pakistani individuals in the execution of attacks. This time the organization which has claimed responsibility for the attacks is Indian Mujahideen, which is believed to be SIMI in a new avatar.

But does that imply that these elements have the right to take innocent civilians’ lives by combining them with religious sentiments? If injustice is felt towards a community or individuals, then there are means to appeal and be heard in a democratic country like India. No religion approves the killing of innocent civilians to justify a cause, and violence only begets violence.

The nation, with its population and vastness, is indeed a soft target for such outfits. Crowded marketplaces and cities are easy to find across the country. The free movement of people across the country and even across borders such as Bangladesh and Nepal implies that it is not difficult. But does that mean the Indian state becomes immune to such attacks and lets things carry on?

The answer is a VEHEMENT NO. Security agencies need to beef up, and there has to be greater investment in security measures from the states. Forces and special vigilant anti-terrorist squads need to operate at the state level around the year. Of prime importance is intelligence which needs to be shared by member states among themselves.

Investment needs to pour in devices such as surveillance cameras which need to be part of Railway Station, Bus Stations, crowded market places, malls, and even small shops. In fact, all shops need to have them installed like the US and other foreign countries like the UK where the same helped trace London bombers’ identities.

It might sound irrational when considering the magnitude of investment, but it would have to be carried out in a planned and phased manner, and the state cannot stay blindfolded.

While, on the one hand, security needs to be beefed up to instill a certain sense of confidence in the minds of citizens, the same state should ensure that measures are undertaken to bring communities on the margins to the mainstream. This will slowly level out the socio-economic alienation.

India needs to act, for time is running out. Forces are trying all possible means to disturb the democratic and social fabric of the country. Indians need to be resilient and ward off unrest by maintaining harmony. The days to follow will be testing for the citizens and state, and vigilance by both would be the order of the day.