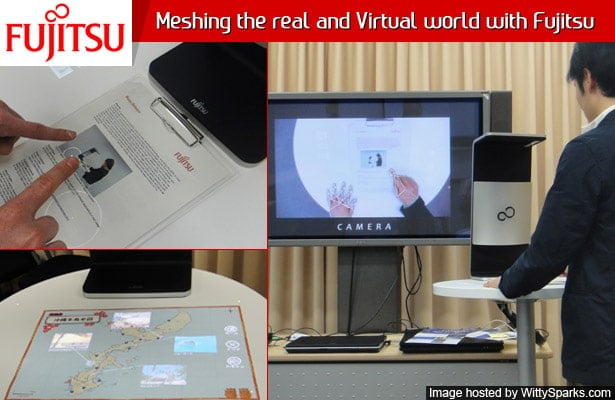 The next-generation user interface is at this moment Fujitsu, which accurately detects the user’s finger and what it is touching, creating an interactive touchscreen-like system, using objects in the real world. This is the perfect mix of bringing your reality into technology.

The idea came about by figuring out how to manipulate objects like paper, this new system doesn’t use any special hardware; it consists of just a device like an ordinary webcam, plus a commercial projector. Its capabilities are achieved by image processing technology. It’s is relatively easy to use and can be very helpful in transferring data fast, and efficiently.

In simple words, this technology works by measuring the shape of the real-world object like a map, paper, even curved surfaces like books, and automatically adjusts the coordinate system for the camera to perceive the image. The projector also works as the camera, and the user can visually perceive what has been selected or is being manipulated.

One convenient feature of the system is that it’s designed not to react when you make ordinary motions on the table; instead, it’s operated only when you point your finger. The system serves as an interface combining analog operations and digital devices.

This interface knows no technological bounds, when not using the touch in certain situations; the system can be operated via gesturing. Hence, the future does hold applications that would use the touch system in combination with the current gesture system.

The usage of this system may be a question to many, as it is not a product you would be able to afford or even need at home; the company believes that this system could be used to show detailed information at a travel agent counter or when in need to fill forms, etc.

The commercial version of the product will only be out in the fiscal year of 2014 because it’s still in its demonstration phase, and has to be practically applied at actual tasks in-order to work on any problems that may arise.