Starbucks and its blockchain collaboration with Microsoft Azure have created quite a stir in the business world. To explain that we are going to talk about the following points in this blog:

Starbucks finally announces its blockchain-based coffee traceability feature at Microsoft’s Build conference on 6th May 2019. Earlier, shareholders teased Starbucks’ blockchain partnership with Microsoft, and now they have finally revealed the details for their Bean to cup initiative.

The initiative called “bean to cup” taken by Starbucks last year has the aim of telling people about where their coffee is coming from. Initially working with the coffee farmers in Rwanda, Colombia, and Costa Rica, Starbucks is trying to create a blockchain-based coffee tracking service. 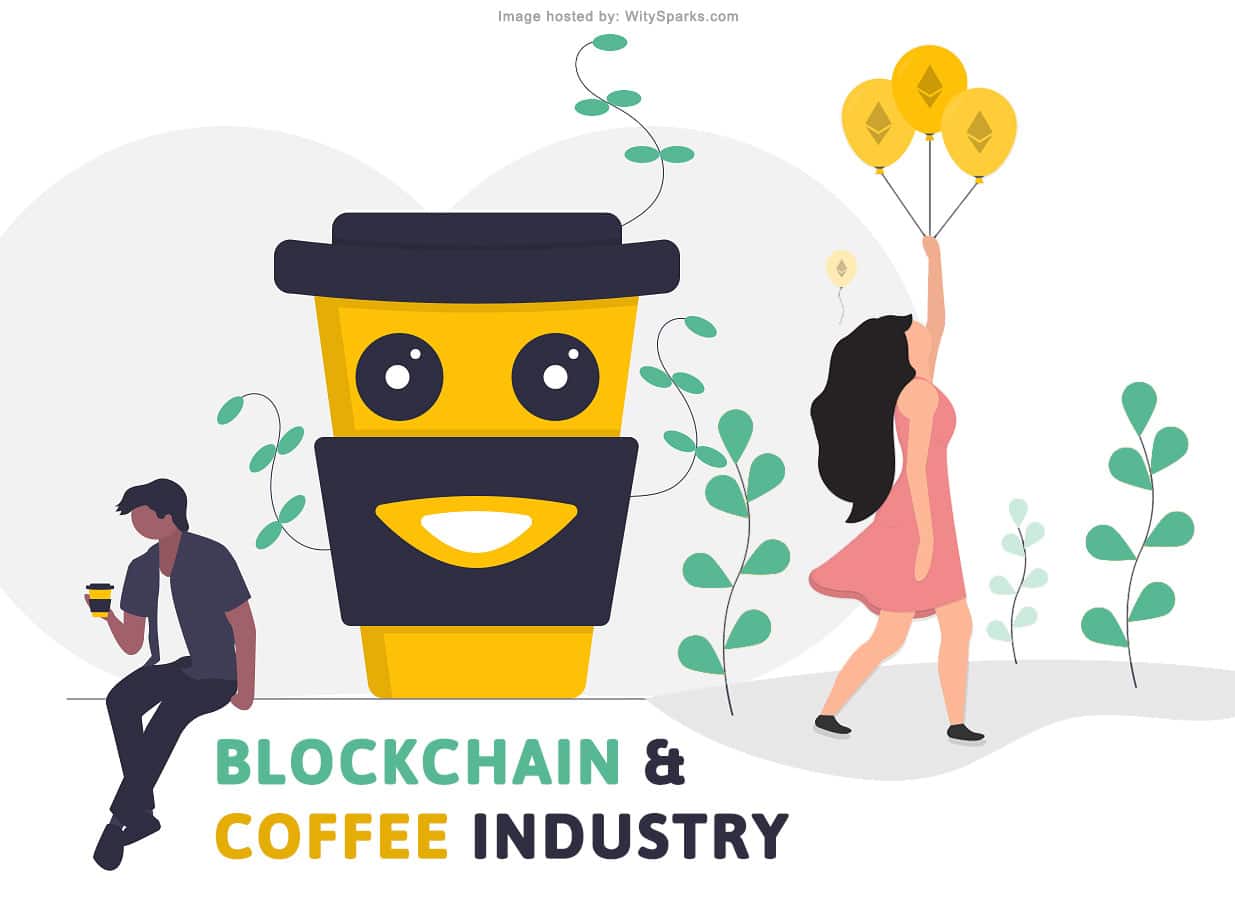 Learn the History of Your Coffee with Blockchain: Starbucks’ New Blockchain Venture

The Original Plan of Starbucks

Their main plan is to help their customer to track the entire journey of the coffee beans in their cup of coffee. From the nation of origin to the cup, the customer would be able to see it all. Needless to say that the farmers associated with this Starbucks venture would definitely gain financial advantages with the successful application of this technology.

The announcement was the highlight of Microsoft’s Build conference 2019. The traceability service would let Starbucks share information about the purchased beans, where they were grown and roasted through the Starbucks app.

The project is maybe an extension of Starbucks’ partnership with Microsoft and ICE in the Bakkt. The company enables the users to exchange bitcoins and other cryptocurrencies into USD, which can later be spent on any Starbucks outlet. With this partnership, Starbucks has not only begun its journey into the blockchain world, but we can hope Starbucks will accept bitcoin (BTC)-based payments in the future as well.

Microsoft’s Azure is a BaaS (Blockchain-as-a-Service) that integrates JPMorgan Chase’s Quorum. With this new service, Microsoft is working towards making it more simple to work with blockchain. The service was announced to the shareholders back on May 2nd.

As easy as it may sound. It is not easy to create Ethereum (ETH-USD)-based blockchain solutions for one of the world’s largest coffee brands that sourced coffee beans from 380,000 farms last year. This will bring another layer of transparency and highlight the firm’s focus on ethical sourcing of coffee beans for that perfect brew.

Is it going to be Really Profitable?

Even when blockchain’s popularity is only increasing, there seems to be slight fatigue in the hype about blockchain.

We can see the change in the momentum of blockchain popularity from last year’s survey by Consultancy Deloitte LLP. The survey clearly showed how people were finally starting to shift towards the practical application of blockchain.

But according to the survey report of 2019, Deloitte has noticed a significant dip in the application of blockchain. This year only 23% have initiated a blockchain deployment. The numbers are down from last year’s 34%. The percentage of people who see blockchain as overhyped has increased up to 43% from last year’s 39%.

Quite the same way, research firm Gartner has released their own survey on supply chain technology and according to their report, only 19% of respondents have ranked blockchain as an important technology for their business, but only 9% have invested in it. The report also stated that by 2023, 90% of blockchain-based supply chain initiatives are going to suffer a “blockchain fatigue” because of a lack of strong use cases.

The reason for this blockchain popularity lag lies in technological immaturity and a misunderstanding of how blockchain tech can help the people connected to the supply chain. The technology of blockchain is still being explored and there is a significant lack of knowledge about what are the best use cases for this technology.

This is why companies have to run “multiple development pilots” and use the trial and error method to find uses that might be of great value. According to Alex Pradhan, senior principal research analyst at Gartner, the majority of companies do not know how to evaluate and assess the use of blockchain tech, because there is no vibrant market for it.

And these are the reasons why Ms. Pradhan rightfully advises organizations to be cautious about the early adoption of blockchain technology. The clear distinction between core possibilities and the hype of blockchain needs to be recognized to successfully implement it.

The Attitude of Starbucks about This Venture

Despite the “Blockchain Fatigue” Starbucks is still excited about the possibilities of its collaboration with Microsoft Azure. Gerri Martin-Flickinger, Starbucks CTO, says that they have a world-class team of technologists engaging in this groundbreaking innovation.

All these may sound overly technical, but at the end of the day, the aim of Starbucks is to bring out the story behind every handcrafted perfect beverage. With this blockchain-based supply chain, they want to reveal the story of many people and their dedication that brings you that perfect cup of coffee.

By the successful implementation of this tech, Starbucks will open up new ground for other organizations to utilize the blockchain-based supply chain to not only bring a level of transparency to the business but also bring out the story of the people behind the scenes.

The Future of Starbucks

Not only for the customers who would be able to track the coffee products using a blockchain system, but the farmers would also benefit from tracking their product’s journey.

Michelle Burns, SVP of Global Coffee & Tea at Starbucks firmly believes that the empowerment of the farmers with knowledge and data through technology will result in the improvement of their livelihoods.

This goes to show that Starbucks’ partnership with Microsoft is working towards not only enriching the coffee community but also starting a two-way conversation with the farmers, connecting them to the customers. Starbucks is trying to bring the farmers more into the limelight and improve their livelihood, which will have a direct positive effect on the coffee community.

The Convergence of Blockchain and IoT for Starbucks

Besides their scheme Blockchain-based coffee tracking system, Starbucks also announced few IoT-related projects they have collaborated on with Microsoft Azure.

One of these IoT projects, the personalized drive-through recommendation just like the Starbucks app, will give the customers customized recommendations. These recommendations would be based on the weather, time of the day, store inventory, etc.

The multi-million dollar coffee empire is also going to use Azure blockchain cloud services, to connect the equipment in each of Starbucks’ 30,000 stores. This equipment includes coffee machines, grinders, blenders, etc.

The IoT-enabled machines are going to collect more than a dozen data points for every shot of espresso that is pulled. These data points include the type of beans, the temperature of the cup of coffee, and the water quality.

The main aim behind the connection of the devices to the cloud is to make it easier to maintain those devices. The machines are an integral part of the franchise and any breakdown will cause a shutdown to the store’s operations.

Connecting the machines to the cloud is going to make it easy for organizations to update their menu. Now they can just send out an updated menu through the cloud whereas before they had to do it by sending out thousands of USB drives and uploading them to the system manually.

Despite the potential challenges of IoT implementations, Starbucks is still going for it, and if they succeed, they will open up a horizon of possibilities for other organizations.

The steps taken by Starbucks in partnership with Microsoft’s Azure Blockchain Service to track coffee production are definitely innovative and daring. The implementation of blockchain is receiving quite a hype today, only it is to some length only hype. There is still no clear idea about how to really utilize and get a result out of that utilization of blockchain tech, besides using it for cryptocurrency.

With that being said, the plan of Starbucks to connect the coffee farmers and clients is an interesting one. They are trying to use blockchain tech to create a more open and enriched coffee community, where the coffee enthusiasts finally will know where their cup of coffee is coming from.

Now, all we have to do is wait and see the results of Starbucks’ daring plans.

Previous Post: « What to Consider When Buying a New TV
Next Post: Buyer journey: How to incite demand in a complex modern-day? »