You are here: Home / Technology / 6 Tips To Create A Secure Mobile App 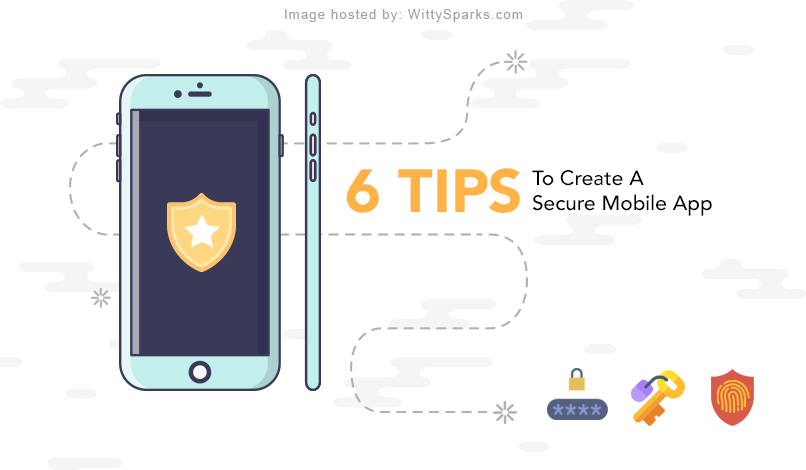 Smartphones play an inevitable part in our day to day life! The smart apps turn the tech devices smarter and help in turning the works quite easier.

Smartphone usage has grown beyond expectations and is closely involved with us. With the vast market of mobile users, businesses have targeted it to grow their brand’s visibility and reach the users.

A wide range of apps are available on different mobile platforms, and for their easy interfaces, the users tend to trust these apps and simply assume the apps to be free from any danger. Though the smart apps have opened up a world of possibilities for businesses of varied scales, those aren’t prevented from the increased security threats.

The mobile apps are highly vulnerable to different threats that lessen the security of the users. The vital reason for security breaches is the misconfiguration of mobile apps. There are several other reasons for developing malfunctions in the apps. The shortcoming of binary protection, wobbly server-side controls, insecure data storage, and client-side injection are a few of the reasons for malfunctions of the apps. Below featured are a few of the basic tips to create a secure app.

A huge number of mobile apps are penetrating the market. The process of payment and several other activities have become easier. As all such activities are growing in large, the threats of security have even raised up. Businesses are not aware of the accuracy of the apps or the latest updates as well. It is essential for businesses to troubleshoot these issues. The companies can’t address the rising threats until they design any secure model for the threats.

Mobile devices get vulnerable to high storage data. For this reason, the necessity of an efficient encryption strategy emerges. For poor encrypting, sensitive data leakage is caused, and the after-effects of leaked personal sensitive data create harsh situations. Encrypting the database from the initial stage ensures the security of the data.

Installation of additional layers to the coding for the security of the app efficiently secures mobile apps. The added security layer allows users to check their identity. This step can easily prevent hackers from breaching the app.

Along with this, technologies like OpenID and OAuth2 can be incorporated that would make the apps safer and secured for the users. If the additional technologies are incorporated into the authorized server, the developers can manage varied credentials between the app users and external servers for ensuring tight security.

5. To the Mark Network Connection and Coding

The cloud servers are the source of data access that ensures the security of the network connection allowing the exchange of data securely. The third party or the API communication from the user’s end must be secured and transmitted without any interception.

6. Other Sources for Securing the Apps

VPN – Virtual Private Network, SSL- Secure Socket Layer, and TLS – Transport Layer Security are considered as some of the other sources that can assure the app to be secured with an encrypted connection. The app developers must ensure to develop secure and encrypted apps for the security of the business as well as the users. Adopting technical methods, the app developers require the deployment of high efforts for securing the apps from any security breaches.

Vivek Shah is the founder and CEO of Capermint Technologies: A leading mobile app & game development company. As a CEO, he likes to help other companies to transform their app ideas into reality.

View all posts by Vivek Shah