You are here: Home / Marketing / WhatsApp or MessageMe or WeChat – Which one would you prefer? 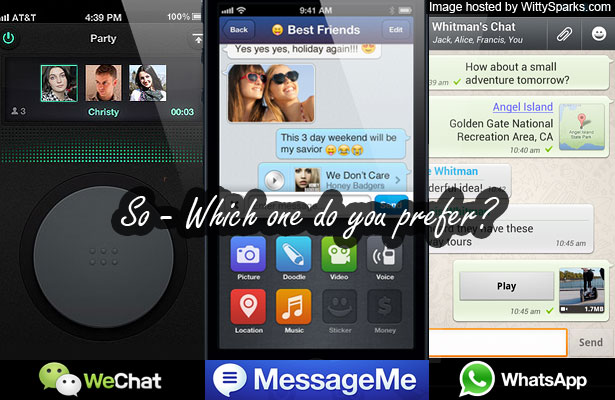 The fast pace growth in technology has changed the face of social media and the mode of interaction among folks. Gone are the days when Gtalk and Facebook were accessed through desktop or briefcase computers.

The nifty little gadgets termed as “Smart Phones” have made it feasible to use these social networking applications on them. They have paved the way for the launch of many such instant messaging applications wherein a vast number of people can be pulled into a conversation at a single time.

There are hundreds of instant messaging applications such as WhatsApp, Viber, Instagram, etc., which enable the transmission of messages among family and friends cost-effectively. They eliminate the fret of shelling out vast sums of money for keeping in touch with Keith and Kin.

Besides texting, one can share clicked pictures and shot videos in close-knit and social circles. These cross-platform texting apps have emerged as an alternative for SMS and MMS and have become a significant part of Smartphone usage.

In terms of popularity, WhatsApp has bet many other messaging platforms such as Viber, Line, etc., and has grown explosively in recent years, providing users with the most convenient way of connecting to friends and family.

This instant messaging app is understandable and viable to use, independent of the geographical location. It allows its users to upload display images, update their status, share text, video, images, audio files, locations on the personal window or in forums, and facilitate emotions using emoticons.

Another two applications which have joined the crowded sector of social media platforms, “MessageMe” and “WeChat,” are proving to be a threat to the popularity of WhatsApp as they have more advanced features.

Tencent’s “WeChat” kicked off in 2010 and has rapidly grown since then with around 100 million users in March 2012, which have risen dramatically to 300 million this year. To give you a detailed description, I downloaded the app, which I found.

WeChat allows free audio and video calls in addition to sending and receiving text messages, unlike WhatsApp or MessageMe, where carrier charges apply. The process is like dialing contacts in your cell phone contact book. The feasibility of sending voice messages is one of the best features of WeChat, which makes texting easier.

Are you dying of boredom? Is everyone on your contact list busy? Want to make new friends?

Then shake your phone and find people who are shaking their phones around locally as well as across the world. This exciting option helps expand your social network, make new friends, and is a good time killer. However, be careful you do not reveal your personal information, which can be misused.

Not comfortable talking to people globally?

Do not fret… The “Look Around” option connects you to people nearby with whom you can share your interests, thus expanding your social network within a certain radius.

There is no need to invest time and go and throw a bottle in the sea as “WeChat” helps to throw a text message or voice message in the sea from your location at a single click. Any stranger will pick this up, and you can kick off with a conversation. The sender and receiver of Drift Bottle remain anonymous until they decide to become friends.

Isn’t this an excellent and arcane way of making buddies?

For those ignorant about the features of “Message Me,” Let me put you in the picture!

Message me, officially launched to the public in March 2013, is just one among other free mobile messaging apps but with additional features which make it even more appealing and exciting for the users. Though it is a newbie in the social networking sector, it has already caught much attention.

What is makes “Message me” so imploring?

With message me, the attachment of media is relatively swift and instantaneous. To cite, you can upload an existing video, shoot a new video or search for one on YouTube that can be added to chat, and this is played inline. There is no need to open up YouTube separately, copy the link, return to the chat window, paste the link, and send it to the person at the other end of the chat.

Apart from sharing text, images, videos, and location, it has one of the unique features called “doddle,” wherein sketches can be drawn and shared with friends, thus providing strong visual and personalization features. Using this option, images received can be edited by giving captions, annotated, and circulated within the social circle with a dramatic effect.

For someone who is a Gizmo freak, this application is a boon. Once you sign up for MessageMe, you can sign in through any other gadget, and all the messages are kept in-sync across the multiple gadgets used. If the user permits, then “MessageMe” imports contacts from Facebook. You can also add sticker-style icons to make the chat more lively and visual.

The addition of these applications to the mobile messaging platform has redefined mobile communication.

With the various choices available, which one would you prefer to keep in touch with friends and family?

The simple and easy-to-use “WhatsApp,” Doodling on “MessageMe” or Shaking and looking around with “WeChat” – So which one do you prefer and use effectively among these?

Previous Post: « Toggle or Show or Hide is pretty easy with AngularJS
Next Post: Samsung to launch the mirrorless camera on June 20th »

I am a pharmacist and Communication skills trainer with a strong penchant for writing which compels me to pen down my perceptions and share my knowledge with different people across the globe. Being a voracious reader, I keep myself updated with the information on varied subjects and in various sectors such as entertainment, fashion, technology, education, politics and thus share my ideology on the same through short pieces of writing and anecdotes. This has given birth to the writer in me who is being nurtured with every passing day.