You are here: Home / Entertainment / 3 Celebrities Who Like to Put the Pedal to the Medal 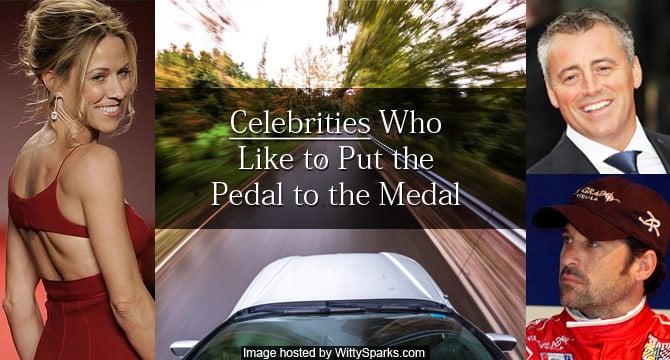 The freedom felt while riding a motorcycle or getting behind the race car’s wheel is a thrill that the famous enjoy just as much as the average Joe. While most racing fans don’t have access to the hundreds of thousands of dollars it takes to put together a racing team, there are other options for those who dream of getting in on the action themselves.

Purchasing a motorcycle or dirtbike is a bit more financially feasible while still meeting the need for speed, particularly with affordable accessories available today at places like the dirtbike online store with fantastic parts and gear prices.

With celebrities frequently spending their days avoiding the almost constant presence of the paparazzi and all that comes with a high-profile Hollywood career, it’s really no surprise that some have found a way to escape all that by enjoying the pure rush of adrenaline that comes from racing. Here is a look at just three of them.

“Friends” alum Matt LeBlanc was into motorcycle racing long before becoming a famous actor, launching his career by starring in a Heinz ketchup commercial at 20. The Massachusetts native received his first motorcycle when he was just eight years old and began participating in amateur competitions, with dreams of racing professionally someday. Fast forward to the present, and the 47-year-old is said to have a collection of some 100 dirt bikes and several supercars.

The former “Joey” star has even hosted his own television show, “The 5 Coolest Things,” focused on the five coolest things in each motorcycle specialty, including off-road, road racing, motocross, and freestyle. LeBlanc has said that one of the best things about being a public figure is getting into the pits at the racetrack, getting close to the drivers and mechanics so that he can watch and pick up tricks.

“Grey’s Anatomy” actor Patrick Dempsey may be known as “McDreamy” on the popular medical drama television series, but he’s serious when it comes to car racing. The 48-year-old says that racing caught his eye at a young age, largely due to his father’s influence, but that it was his wife Jillian who transformed his interest into a professional racing career.

Dempsey has said that she was tired of seeing him sitting around watching the SPEED channel, so in 2004 she bought him a three-day racing course. It was the catalyst for his racing addiction, with the actor becoming immediately hooked on the sport.

The “Made of Honor” star formed Dempsey Racing in 2006 and debuted in the GT series in 2007. Ever since, he’s been able to balance his love of racing with a hectic acting career, capturing a third-place finish and nabbing a pair of second-place finishes to get him to the podium in 2013.

Singer Sheryl Crow is also a big racing enthusiast. When she was at the Daytona International Speedway last summer to perform the pre-race concert, she spoke about her love of cars and speed. She revealed she has a 1964 Corvette and says that she grew up on motocross bikes.

In an interview that appeared in the October 2009 issue of Health magazine, the nine-time Grammy Award-winner said that when she turned 40, she got her old dirt bike out, started going to dirt bike tracks, and even jumping off cliffs, revealing that it made her feel “really alive and exhilarated.”

Photo by The Heart Truth via Wikimedia Commons

Previous Post: « Emberlight – the control of lights at home, now on your fingertips!
Next Post: Would you marry a rape victim? »