You are here: Home / Entertainment / Hollywoods obsession with Bollywood 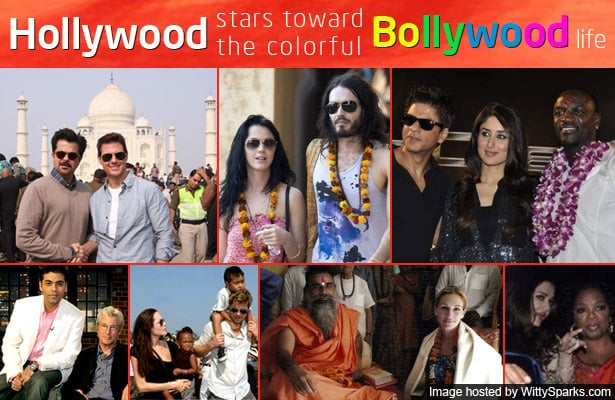 It’s been in the papers, it’s been in the news. Hollywood celebrities have put Bollywood on their radar and are not shying away from accepting it. Since the hit of a slum-dog millionaire, Anil Kapoor and A.R.Rahman have mapped the way for Hollywood stars toward the colorful Bollywood life.

In the recent past, a handful of celebrities have visited India for business, weddings, promotions, you name it!. And these stars have been one of the most well-known around the world, Nicole Kidman, Angelina Jolie, Brad Pitt, Julia Roberts, Richard Gere, etc., are just a few who’ve experienced the vibrant nation in the past five years.

The latest visit by Tom Cruise to promote his new movie, starring our very own Anil Kapoor The Mission Impossible 3 Ghost Protocol, has made so many headlines that it’s almost bizarre.

Paris Hilton visited to launch and market her new handbag and accessory line, and did interviews on MTV, in order to reach the trendy youngsters of India. She also donned saris and made comments on how beautiful our culture is.

Oprah Winfrey’s visit was no less hype for her new show Oprah’s next chapter. She did a two-part interview of women across varied strata of the Indian society and explored the customs and traditions that make Indian women who they are today.

Not to mention, her visit to the Bachchan household where she met their newest arrival Aaradhya Bachchan and headed off with the family to a party hosted by the Parmeshwar & Adi Godrej.

From the music scene, Akon, Metallica, Shakira, Pitt Bull, and Lady Gaga were some who spread their tunes across the country.

Katie Perry and her now ex-husband Russel Brand chose the country to marry and returned to rekindle their marriage.

Even though this type of Hollywood celebrity attention is doing great marketing for India, it has its side effects. With Indian showbiz taking a lot of inspiration from western movies, the cultural values of India are getting distorted at many levels. Plus the added celebrity outlook toward the nation has an impact on the vast fan following they have back home.

When they depict India from their narrow experience of the country, they are not only creating false ideologies about its citizens but also confusing the Indian viewers too. Oprahs’ interview shed some light on a very subjective area of Indian society, not many of the women relate to what was depicted in the show. These types of controversies are enablers to rather a negative spotlight on the country’s otherwise rich values and morals.

There is no disagreement with the fact that all the Hollywood exposure is also opening up a lot more opportunities and creating awareness of our roots. However, it’s time we stop imitating the cultures of the west and embrace our own values, to be the unique country that we are.