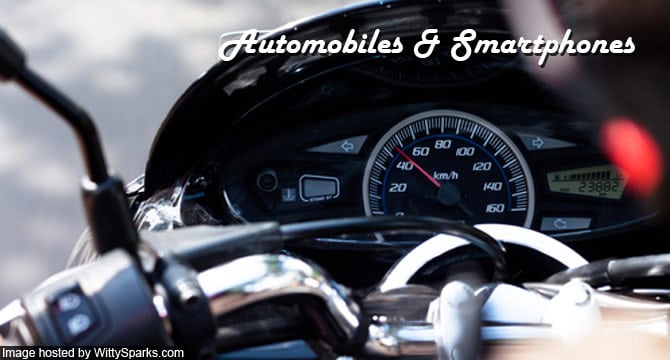 Smartphones, like cars, are a ubiquitous part of the American experience. According to the Nielsen U.S. Digital Consumer Report, Americans now own an average of four digital devices and 65 percent of American households own a smartphone.

With smartphones becoming such an integral part of everyday life, it should come as no surprise that automobiles and motorcycle equipment have evolved to take advantage of smartphone technology. Here are just a few of the fascinating ways that smartphone technology is being integrated into automobiles, motorcycles, and even the streets themselves to make drivers safer and more connected.

As smartphones have evolved, so have consumer’s expectations of their vehicles. ABI Research recently forecasted smartphone-integrated technology will be found in 43.6 percent of vehicles by 2018. Smartphone-integrated technology in automobiles ranges from satellite-based GPS navigation and streaming music services to telemetric data available through manufacturer-specific subscriptions.

Take, for instance, Chevrolet Spark’s “MyLink” feature. MyLink uses a 7-inch touchscreen mounted in the dash and gives drivers easy access to their smartphone’s contact lists, playlists, and even some apps such as Pandora.

By using Bluetooth technology, MyLink gives users access to their smartphone features while keeping their phones safely stored. While such technology was once only available to the drivers of luxury autos, features like MyLink are finding their way into many next-generation automobiles.

Motorcycles are also integrating smartphones in many surprising ways. Motorcycle helmets with hands-free technology allow bikers to stream music, make calls, and answer the phone without having to access their phones.

Usually integrated directly into the helmet by the manufacturer, these helmets feature easy-to-access buttons that allow riders to answer calls with a quick touch to the side of the helmet, freeing their hands to react to changes in road conditions or shifts in traffic.

Even more impressive is the development of motorcycle helmet HUD technology such as Nuviz, an attachable heads-up-display visor that allows bikers to view smartphone streamed information ranging from weather forecasts and maps to telemetric data without taking their eyes off the road. Technology such as this has the potential to revolutionize the way riders can safely interact with their devices while on the road.

Perhaps one of the most impressive technological advancements comes in the form of an experimental technology revealed by Honda: Vehicle-to-Pedestrian systems, or “V2P” technology, use Dedicated Short Range Communications to detect pedestrians with a DSRC-activated smartphone to alert nearby drivers to a pedestrians presence and if they are at risk for a pedestrian collision.

Furthermore, if the pedestrian is at risk the software begins to emit an urgent and loud warning signal and onscreen message. Honda is also developing Vehicle-to-Infrastructure technology in a pilot partnership with the U.S. Department of Transportation that could possibly result in the integration of these advancements into everyday life.

While still in early development, the system is currently being tested by the Department’s Safety Pilot Model Deployment program in the city of Ann Arbor using eight prototype Honda vehicles.