You are here: Home / Technology / The 4 Essentials of a Gaming Laptop 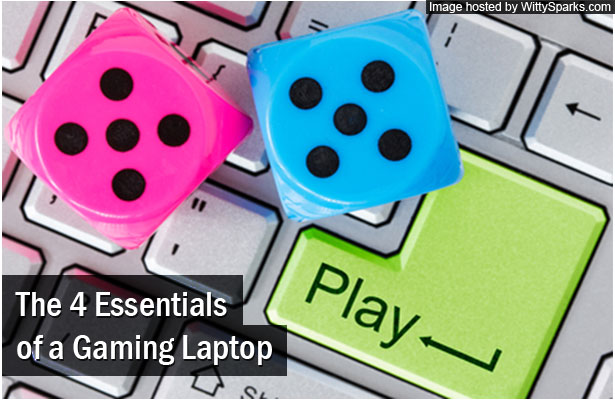 Newzoo projects the video game industry to reach $86.1 billion in 2016, providing a healthy market for many gaming devices. While gamers may turn to desktop computers for the ability to build their machine or the cost, plenty of gaming laptop companies provide a way to take your gaming on the road.

While laptop computers are more expensive than a similar desktop setup, the mobility of laptops justifies the splurge for many consumers. When you’re selecting a gaming laptop, the primary considerations to take into account for your purchase are the graphics card, processor, cooling system, memory, and user upgradability.

The graphic card on a laptop is the first thing to consider in your potential machine. The GPU does a lot of heavy lifting in many computer games these days, as most big-name titles have stunning 3D graphics demanding on your card. Also, computer games often can add mods to the base game installation, with graphical mods making the game even prettier.

Notebook Check’s benchmark reports show that the Nvidia 780M in SLI configuration is the top-performing card. The AMD Radeon HD 8970M Crossfire comes in a close second. SLI and Crossfire are Nvidia, and AMD features, respectively, to allow you to use two video cards in tandem.

While the graphics card rightfully gets a lot of attention in a gaming laptop, the CPU also needs heavy consideration. Some games aren’t particularly graphically intensive, such as Dwarf Fortress, Minecraft, and Terraria, but they require a great deal of processing. An underpowered processor ends up bogging down the entire process and making your gaming experience a frustrating one.

The Intel i7s are on their fourth revision and lead the way in processing. The Guardian reports these are the best selections, although the i5s aren’t bad if you’re looking for a better value for your budget. Another important consideration is your Internet speed, such as one with FIOS availability, since the leading distribution channels for PC games are digital downloads.

There aren’t many games out there that take advantage of massive memory numbers, but having eight gigs of RAM or so is a good idea to future-proof your laptop. Most laptop manufacturers make it easy to upgrade if you can’t get the maximum amount of memory for your system to start with. If you want to perform other memory-intensive tasks such as creating large Photoshop files with multiple layers or video rendering, get as much memory as fits in the machine.