You are here: Home / Technology / To pay from your pocket or wrist? 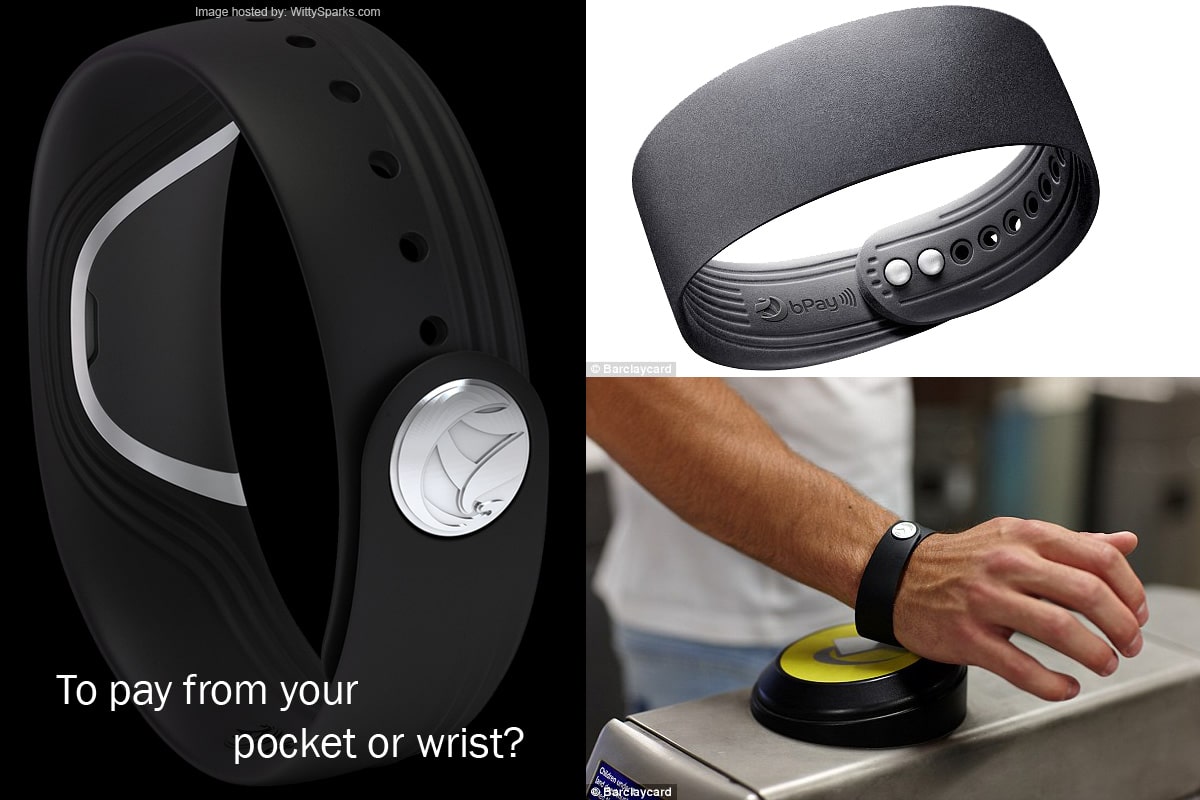 Apple was up to its tricks again with the Apple Watch launch in 2015, with many people immediately asking what the watch would offer. Around the same time, contactless payments began making noise as possible payment options.

As consumers, we are all used to making cash or card payments (and maybe still cheque payments), but as the digital age rolls on and technology advances, more convenient options are emerging. And now, with the combination of wrist devices and contactless payments, it could become easier than ever.

Although the Apple Watch is the biggest thing to hit the wrist wearables market in over 100 years, it is not the only wrist device to make tech headlines over the last year. Because contactless payments have been mostly limited to mobile devices such as phones or tablets, Barclays Bank in the UK decided launching a wristband that one can hold up to a contactless PayPoint would be a strong investment.

The band is known as the bPay band, while Purewristis of a near-identical concept in the US. The wristband contains a chip onto which you load funds. How do you load the funds onto the wristband, you might ask? To do this, you download the app, from where you transfer money to the band.

There are currently limits on how much you can load while the devices are still in their teething phases, but this ensures that you do not lose a potentially high amount of funds if the wristband is stolen. And as the band cannot go into credit, the risks are low compared to carrying around a credit card.

Today the tech world really comes down to convenience. The need for greater speed revolves around how impatient we have become, while the size depends on how well it fits in our pockets or typing accessibility. Developers of wristbands are banking because people will no longer need to fish around in their pockets when needing to pay.

A quick swipe of the wrist is all it takes, and this theory does come with some merit. Perfect scenarios where this payment method would work a treat would be public transport. The thought of going into stadiums for sporting events or concerts where no one is rooting through their wallets or arguing with bar staff about the lack of card machine facilities seems quite refreshing.

Of course, all of this can be done on your mobile device too, but some people prefer to leave their device at home, or perhaps even forget it by mistake. With the wristband, there shouldn’t be any danger of forgetfulness.

Apple is hoping that the Apple Watch will be just as convenient as the banks’ wrist bands currently being implemented. Apple Pay is the Californian tech giant’s answer to moving into the contactless payments sphere.

The ease of making a payment from an Apple Watch is almost as straightforward as the bPay band. However, the only extra required is a double click on the watch’s side when held up to a contactless pay-point.

Such is the rate at which technology is moving forward; it isn’t unimaginable to see us using this form of payment at almost every self-service pay-point shortly. McDonald’s in the UAE has developed digital ordering stations in-store, where customers can pay via card.

It is only a matter of time before this becomes standard in our daily lives, and if one can pay via the swipe of their wrist instead of presenting their card and entering a code, then even better.

It seems apparent that contactless payments will make the most sense from the wrist; it just remains to be seen off what devices. As expected, the wristbands are considerably cheaper than a smartwatch, although they only carry one function.

On the other hand, the smartwatch will offer you a whole load of extra functions that one might feel necessary in the digital age. It is possible to talk to people through your smartwatch, while Scrabble and Poker’s activities can be played on today’s smartwatches. Indeed MobileCasinoCanada.ca is putting a large focus on smartwatch accessibility.

The current devices noted aren’t to be alone in this field for long, however. Samsung Pay, set to work from Samsung devices, is sure to function in a near-identical way to Apply Pay, while Google Wallet has been in the works for some time now.

Jawbone, a technology wearables company, is producing an exercise statistic band in partnership with American Express. Apart from being fully geared to measure exercise statistics, it will have contactless payment functionality topping up with Amex.

Various services worldwide are essentially contactless payments, but they all seem to rely on a visual code similar to a bar code in which to make payment. A revolution in the payment sector is surely coming, and it looks set to come from the wrist.

Previous Post: « Are 3D and HDTVs Really As Good As They Are Supposed to Be?
Next Post: Parse is Closing Down: Try other Alternatives »