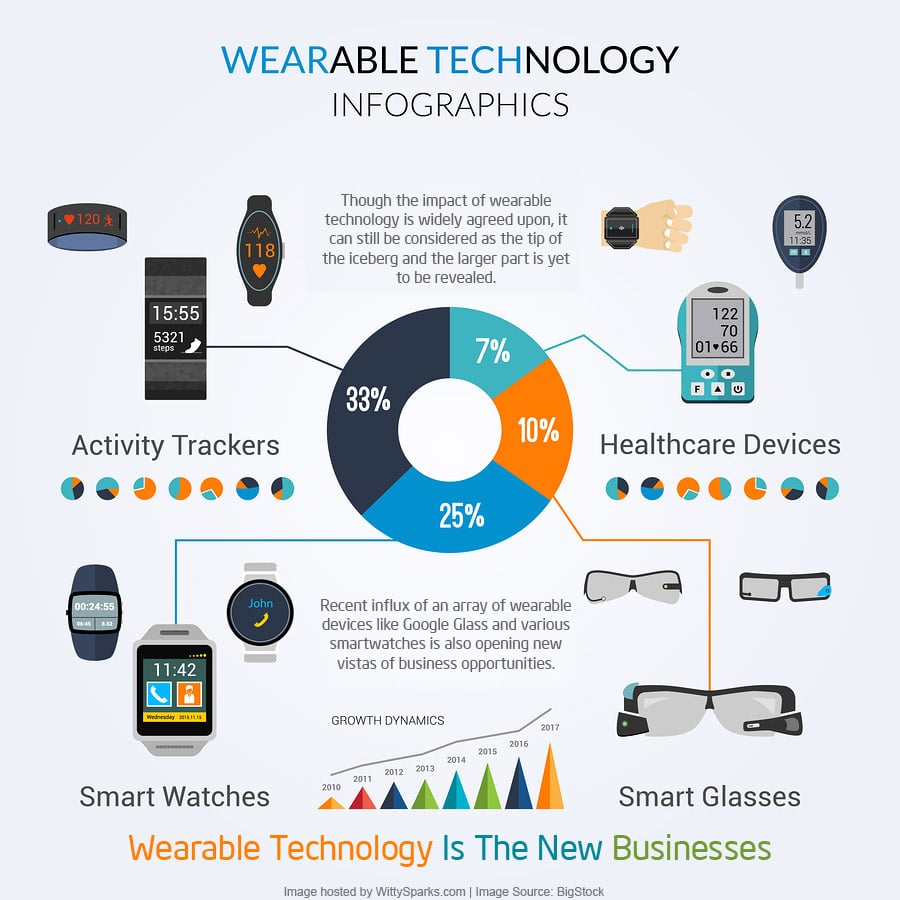 Undoubtedly wearable tech ever since it came continued to grow as a consistent force and presently it is setting trends for businesses and industries in an unforeseen way. There have been numerous contributing factors to this huge growth and influence of wearable tech, most notably, its close bonding with the Internet of Things.

Thanks to this unified complementary approach pertaining to wearable interfaces or the Internet of Things (IoT), businesses of diverse niches and sizes began to introduce these new facets of technology in their day-to-day business process. The most acclaimed wearable techs like Apple Watch and Google Glass just began to pick up and they are emerging as the next big trendsetters in businesses.

While some wearable devices like smartwatches or wearable optically mounted computers (like Google Glass) are considered fun gadgets, there are many others who regard these new tech interfaces to have really trendsetting potential.

From wearable cloud apps to CRM apps for wearable devices, your business can get a boost from this new technology in more ways than one. Though the impact of wearable technology is widely agreed upon, it can still be considered as the tip of the iceberg and the larger part is yet to be revealed. Let us have a look at the key ways that wearable technology can influence business.

When wearable technology just began to take the business and techies by storm, in those early years the app development and marketing were basically targeted for individual users.

But with time as enterprise mobile apps continued to play a bigger role, the focus of wearable apps also began to take business usage into consideration, and eventually, this became a solid niche known as wearable business apps. Now, most wearable developers are conceptualizing, developing, and designing their apps with business aspects and processes in their consideration.

Obviously, offering a smart business app on the wrist hugging device has a great impact on employee productivity, simply because one does not need to hold a device in his palm to do something. This hands-free mobile engagement helped to increase the overall organizational efficiency as well. There are many ways wearable tech helped businesses in reducing the drainage of time and labor.

With powerful cameras in the wearable devices service engineers and technicians enjoy great ease and similarly, with the hands-free experience of wearable devices their efficiency, on-job communication, and accuracy increase many times.

Moreover, in some industries like construction wearable tech offers smarter ways to interact with mobile communication while both of their hands are busy. This also reduces the on-job risks of fatality to a great extent. In healthcare state of the art, wearable health apps are offering numerous ways to stay connected with real-time patient information without needing to take out the mobile device all the time.

Is the impact of wearable devices similar to smartphone?

To make an assessment of the wearable devices on businesses and consumers we can easily call to mind what smartphones did to businesses and users. Smartphones just in a span of few years completely revolutionized the way we interact with the web, digital world, and tech interfaces in our life.

Now they facilitate online business communication and business meetings on the go, apps on these devices manage your business process and let you share and sink data among remote employees and stakeholders through the cloud.

Wearable devices like their predecessor can further add speed, agility, and efficiency in the business process and can take the baton from mobile devices to lead digital business endeavors.

Though, until recently wearable apps have just been extensions of so-called mobile apps, the devices are increasingly showing potential to offer standalone apps that in the time to come will help to replace smartphones with more powerful wearable devices.

To understand the increasing standalone device capacity of apps Google Glass can be a great example. From responding to verbal commands to contextual map guides to translation services, Google Glass is the smartest hands-free device that hardly requires any manual interaction.

For instance, while attending a business meeting an executive wearing a pair of Google Glass will now be able to take a look at all the information regarding the client while facing him face to face. This highly contextual and completely hands-free rendering of information made this wearable so sophisticated for a variety of purposes across business environments.

The Moto 360 which is a completely voice-operated smartwatch is another example of a smart wearable device that to a great extent replaces the smartphone. This stylish smartwatch serves as a smart business assistant during meetings and all types of professional interactions. All these smart wearable devices with their powerful features and increasingly extending capabilities are going to play a more integrated and dominant role in business.

How new business opportunities are being created by wearable technology?

The recent influx of an array of wearable devices like Google Glass and various smartwatches are also opening new vistas of business opportunities. From offering user-specific business insights to real marketing opportunities through push notifications on wearable devices to a new mode of collecting user data for further use in business analytics, wearable technology is creating unforeseen ways to add value to business processes and open up new opportunities.

From offering developers a really brimming niche of development to creating new tech niches of integrating wearable technology with fabric, wearable accessories, and other things, we are just going to experience a boom of wearable tech and corresponding business opportunities.

With a wearable device, you are always connected without requiring you to get in touch with mobile devices every now and then. Moreover, this continuous live connection will facilitate more interaction and engagement and that would further provide more business insights creating more business opportunities.

View all posts by Mike Kevin