You are here: Home / Entertainment / The Top 10 Best Ads of the Entire Indian TV Era 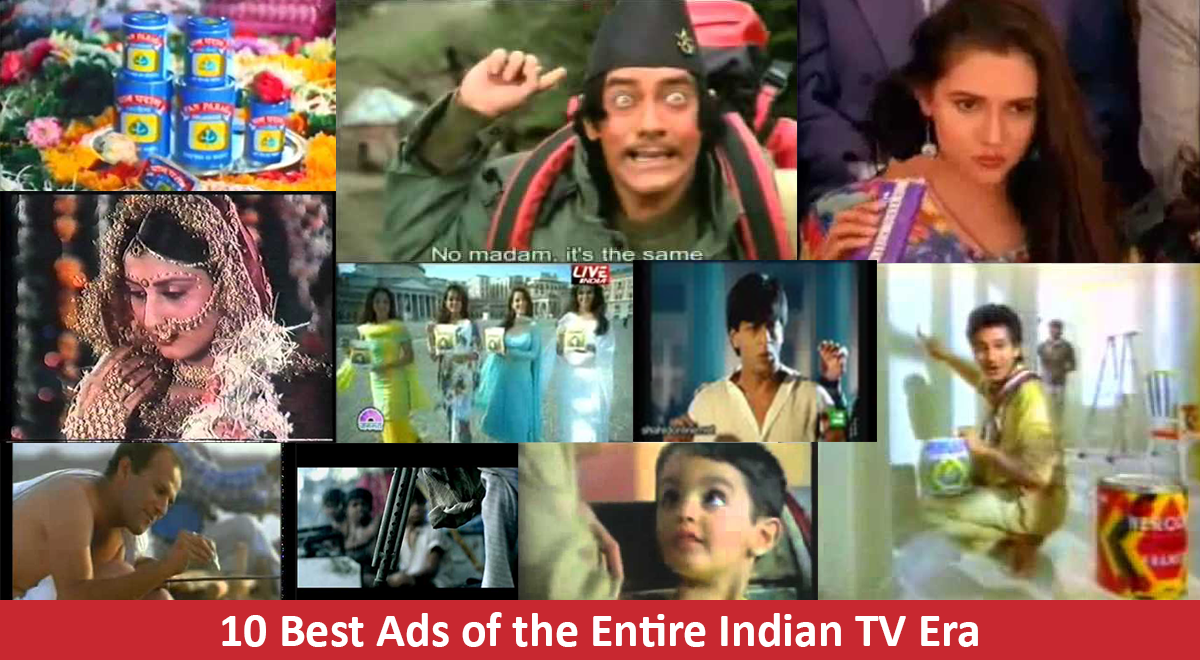 Over the years we 90’s kids have seen the actual transformation of our country from the past generation to the present one. We have witnessed the evolution of TV from watching black & white Doordarshan TV to cable TV to colored HD.

We have loved playing in the mud and sand and also we love playing FIFA on our play stations. Some of the TV commercials that had touched our hearts at that time will definitely light up a nostalgic spark when you watch it right now.

Here are some Indian TV ads that will definitely take you back to those golden days.

This ad featured the leading stars of that generation Shah Rukh Khan, Shahid Kapoor, Rani Mukherjee, and Kajol. This catchphrase “Yeh dil maange more” was written by Anuja Chauhan in 1998 and since then it is quite popular among the Indians.

This ad features Aamir Khan who was the brand ambassador of Coca-cola for a long time. He played a Nepali guide in this commercial who is after a bottle of coke. This slogan “Thanda matlab coca-cola” was a real big hit and is still popular among the 90’s kids.

One of the most popular lines of the Indian commercial era is the song that is associated with Nirma washing powder. This ad has inspired many other ads, poems, songs and more. We can just hear it all day long and never get bored.

The oldest beauty cream that is so effective and popular. It removes blemishes, pimples, marks and whitens skin tone. It has all the qualities in one that you cannot find in today’s products. Vicco turmeric commercial is also so popular that we all 90’s kids know it by heart.

This commercial ad of Dhara featured a cute kid Parzan Dastur who is all grown up and has done movies as a lead. He asks for “jalebis” in this commercial that made the as even more popular.

The yesteryears did not cast mainstream actors much. But this ad of Pan Parag did feature Shammi Kapoor and Ashok Kumar. These two actors were seen together for the first time. It had an ambiance of a marriage that made it even more interesting to watch.

This ad has got to be the best ad of all time. It brings about patriotism and enhances your love for the nation. Filmed beautifully, this ad was aired in 2007. This ad has received a national award as well. You will definitely get goosebumps while watching this ad.

This fevi kwik ad features two men fishing. One of them uses fevikwik on his stick and thus catches fish in no time. This is one of the ads that is remembered by everyone even now.

This ad features the happiness of a girl who becomes really happy when she sees her man winning on the cricket ground.

Nerolac paints ad is also a popular one. Our 90’s kids know the song by heart. We have grown up watching these ads on TV since it was just Doordarshan.

In recent times, online shopping seems to be a go-to option for the masses but to make brands popular in households, TV commercials are still a preferred and powerful medium. E-commerce sites have also benefited from commercials as they toil to make themselves more recognized.

Online shopping offers savings as well as convenience which has been projected in these commercials. The creativity has continued in this field if anything the penetration has increased. The commercial market has grown substantially when it comes to promoting new products and services.

Previous Post: « Simple Points You Must Use to Avoid Taxi Scams
Next Post: Tips For Staying Calm During A Bank Job Interview »

The author is a technology writer who likes to cover the ongoing trends. She has a special interest in the growing e-commerce sector especially on the money saving deals like Flipkart Coupons.

View all posts by Pooja Sharma