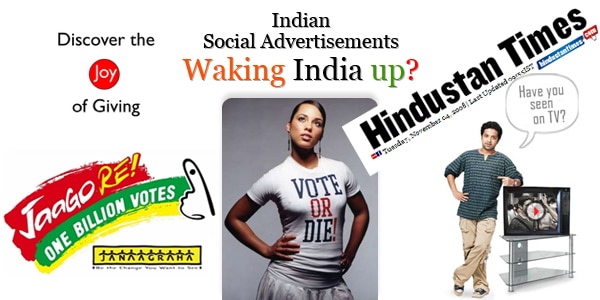 Nowadays we find a lot of advertisements with a social message i.e. conveying a social message of creating awareness among the masses of India about key issues which are of prime importance and act as a democratic right to the common man.

These social advertisements operate as Corporate Social Responsibility (CSR) activity for corporate. The latest ads which we see are Tata Tea “Jaago Re” campaign, Airtel ads, and many more.

Many companies are creating ads with a CSR message in order to generate a sense of conscientiousness and trust in the brand while some other are made from the Government’s side. Such advertisements help in establishing an image with a brand and helps the common man relate the brand with it.

These ads create a huge impact on the mass audiences of India. For example, the Tata Tea “Jaago re” campaign which was aimed at making people aware about exercising the right to vote was well received by viewers. Hence such kinds of CSR ads help in generating top-of-mind recall for these brands.

The recent commercial talks about individuals needing to broaden with changing times. It shows two friends sitting in a restaurant and one of them tells the other friend to have a look at the gay couple on the other table.

So his friend picks up a rolled newspaper and taps him on his head and continues to have his lunch. A punch line then props up saying â€œit is time to open our mindsâ€.

The TVC has been created by Lowe Lintas.

The Hindustan Times newspaper is projected as a tool to help create an awakening that has been fund wanting till now Also, to get out of the shell of conventions and start accepting the new facts of life.

The commercial shows a poor child sitting on a footpath surviving on a small piece of bread. There is this rich boy eating a lollipop on his way back home from school with his mother. He sees this poor little boy and feels bad for him. He runs to him and gives him his lollipop.

The poor kid looks at him with immense happiness and the rich boy also feels proud about his act of helping the needy and bringing a smile to the poor kid’s face. The commercial ends with “Discover the Joy of Giving”. September 27 to October 3 is celebrated as the “Joy of Giving” week. The TVC has been created by Euro RSCG India agency.

This commercial is about promoting the cause of helping those who are in need and make an attempt to bring smiles to the faces who need a helping hand to lift them up.

Some more commercials from yesteryear’s..

View all posts by aparna