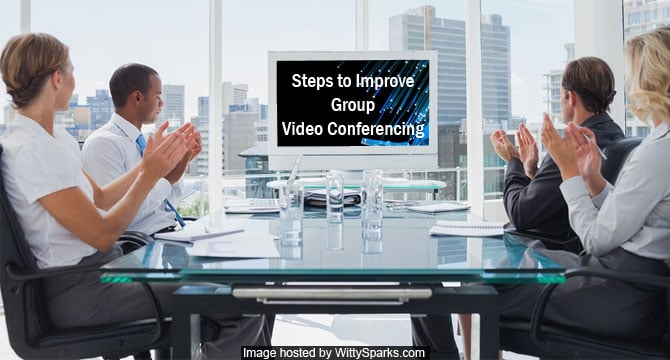 If you are a business professional who uses videoconferencing to conduct meetings, this scenario probably sounds familiar. You’re on a virtual call with your coworkers when you throw out a question to the group and there’s an awkward silence.

These are all possible scenarios, but they don’t have to happen. There are some simple ideas to improve group videoconferencing and make your next meeting more productive, instead of wasting time.

The first key to conducting a successful videoconference is to make sure you have done plenty of preparation. The last thing anyone wants is to start a meeting only to be held up by delays such as problems getting a picture up on the screen, or trouble connecting to the audio source.

A good idea is to ask participants to log in to the system 10 to 15 minutes ahead of the scheduled meeting time so you can conduct a roll call and verify that everything is working properly, the president of the time-management company The Productivity Pro tells Inc.

One way to make sure you’re getting the best in videoconferencing is by using a company that does all the hard work for you and is available to troubleshoot any potential issues.

BlueJeans provides a videoconferencing service through a cloud-based system, so you don’t need to download any new software or hardware to make it work, making the process much simpler for everyone involved.

You can also prepare by letting people know what to expect. Because you don’t have the advantage of being in the same building with them, where you could mention something about the meeting when passing by in the hallway or when waiting for the coffee machine to brew a pot of coffee, you should make sure everyone is up to speed.

One easy way of doing this is planning ahead and sending out a detailed agenda by email. That way, everyone is ready to discuss the topics on hand and will be able to easily follow along from remote locations.

You don’t want to make it obvious to everyone that they are in a virtual meeting. You want it to feel like everyone is in the same room, sharing ideas and letting the constructive conversation flow freely when it’s appropriate.

Therefore, don’t do anything special or out of the norm to draw attention to the fact that you’re videoconferencing by saying things like “Can you hear me?” according to Northwestern University.

If people can’t hear you, they will let you know. Also, try to be as natural as possible and don’t use excessive movements or motions when speaking. They can appear jerky on camera if there is any delay, which could distract the other participants.

You do want to acknowledge that there’s a camera in the room though by looking into it. That way, people will get the impression that you are looking directly at them and connecting with them.

Once the videoconference is underway, you want to make sure to keep people’s attention. There are a lot of other things they could be doing, and very well might be trying to do without you noticing since you are not physically in the same room.

This could include sending text messages or checking email or other ways of multitasking, which really ends up meaning they are paying only some attention to what you’re trying to convey.

You can nip this in the bud by getting people involved from the very start. To keep people engaged, the Harvard Business Review suggests assigning various tasks. One employee can be the minutes-taker while another jots down ideas on a whiteboard and a third directs the question and answer session.

This way, everyone has a job to perform, so there’s really no way they can zone out. These tasks can rotate the next time around, so nobody gets stuck doing the same thing twice.

4. Stay Connected After the Meeting

This last tip is very important. Once the meeting is officially over, you want to make sure your message is still resonating and your employees are actively thinking about it. One way to do this is to schedule informal meetings, perhaps during lunchtime, where the conversation can continue.

Since the team is more natural in these settings than they often are during more formal and businesslike videoconferences, some of the best thinking and problem-solving can come from holding these sessions, according to Forbes. Employees will have a forum to take your message and run with it, making sure that the message doesn’t end with the meeting itself.

Image Source: Business people applauding during a video conference in the boardroom