You are here: Home / Education / How Roblox Education Initiative Changes the Modern Education 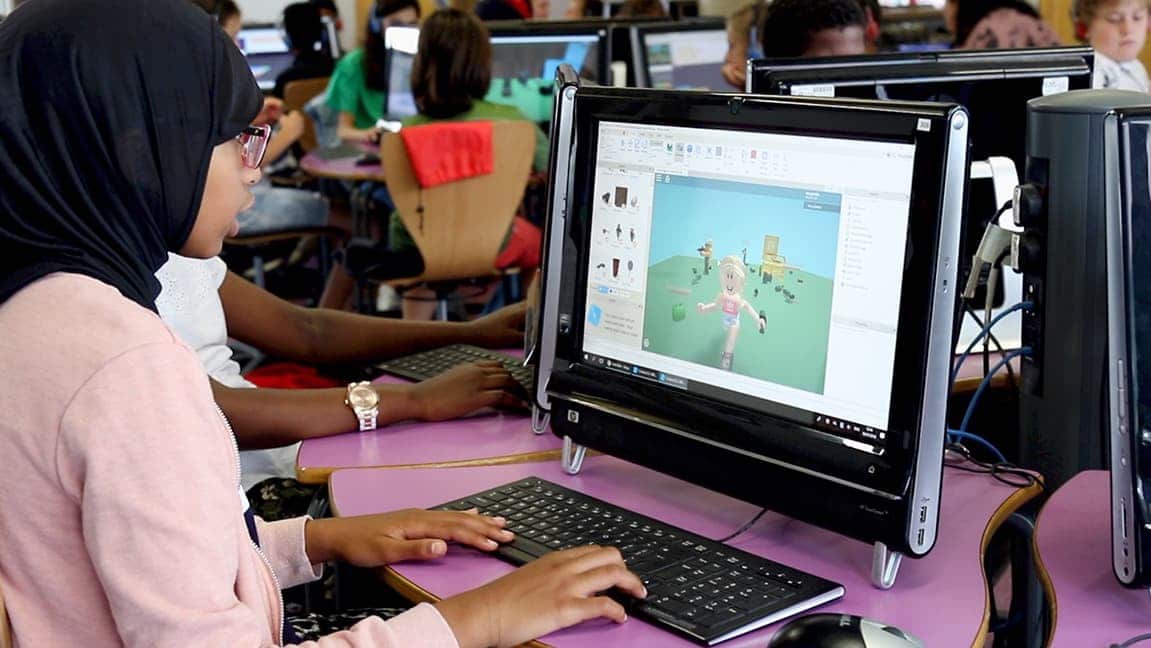 In August 2019, Roblox developers twitted about surpassing an immense number of 100 million monthly active users. Now the platform is the biggest rival of Minecraft and one of the most popular titles amongst youngsters. The educational initiative, Roblox Education, was officially announced in May 2018 after successful testing in 500 coding camps in the US, Canada, Europe, and Asia. European camps have attracted 50,000 students alone, TechRadar reports.

It appeared to be an astounding success that persuaded developers to scale up the program. Now it’s available on the redesigned game’s website along with free detailed manuals for students and educators. The fact that it’s free and works on a wide range of platforms makes it unprecedented. Let’s take a closer look at the opportunities. I also recommend reading about how tech makes education more interesting before studying this particular case.

1. This Game is a Huge World

Just in case you are reading this article with the idea that games are a waste of time, here are some counter-arguments. The first one doesn’t even need proof because everybody knows how much children love playing video games. Next, you should understand that gamification is a full-scale practical approach. It’s based on informal learning through game elements applied in non-gaming situations. Methods of gamification usually involve gadgets and the Internet to engage the student to communicate, share experiences, collaborate in multiplayer, and compete for higher positions on leaderboards.

From its first days, Roblox is a platform in which players can design and publish their own games. Players are actual creators of the entire Roblox virtual universe that totals over 56 million playable titles. Over 2 million of them are indie development studios that generate real income by entertaining others.

Roblox features one of a kind economic system that has an educational effect. Creators who succeed to create popular games can sell virtual objects like cars, gear, exclusive accessories, and even game passes. The great point is that you can’t just push users to buy something. It has to be a really engaging experience, so it’s incredibly challenging and rewarding to reach profits.

Virtual credits, Robux, are convertible into real money and vice versa. As a result, children can learn how game development business functions in a nutshell and try to become its rightful members. There are tutorials for such essential things as planning developer’s economics, advertising particular in-game objects, and designing unique premium-quality objects for sale. No matter how old students are, they can also learn how to exchange Robux into real money and transfer them to the wallets of their parents.

Making income from scratch is probably the hardest task for players because it requires in-depth knowledge in other spheres combined with exceptional creativity. There are no exact numbers of payouts to the top game creators. According to Engadget 2017 report, incomes fluctuate from $250 to millions. Roblox SEO David Buszucki only mentioned that 2 developers earned over $2 million each in 2017. Figures for 2019 must be several times more impressive due to almost 100% growth of the monthly active user base.

The current version of the RobloxEdu provides several scalable in-class solutions that include lesson plans and creator challenges. Educators can use them without changes or adjust the difficulty level for particular groups of students. Challenges start from introducing the basics of high-level coding to practicing the building of full-pledged multiplayer experiences. Without going too far, you can catch creative educational solutions. For example, the construction of historical landmarks is an excellent way to combine a history class with modeling basics.

Of course, the best platform for coding is a computer, but Roblox is also available for iOS, Android, Fire OS, and Xbox One. Developers didn’t expect it to happen, but this condition provided users with an opportunity to discover more about optimization.

Together with learning materials, students can learn how to distribute calculations, find errors, and analyze client-side performance. Using the microprofiler, they can diagnose common performance problems on different platforms and fix them using the knowledge from challenges. Cross-platform courses also include scripting of control schemes, adjusting USB gamepads, experimenting with mobile hardware, touchscreen capabilities, and even game genres.

5. Out of Class Experience

Educational features of Roblox influence not only in-class activities. Progressive parents can study the Roblox Parent’s Guide to learn how to create exciting and safe experiences for kids. It’s an opportunity for parents to learn something new and get involved in their child’s virtual activities. There’s a dedicated mobile app for observation of viewed content and control over messaging options. Inappropriate content is rarely met on the platform due to proactive moderators and automatic chat filters that hide rude language and prevent your children from sharing personal data in any form. However, it’s always better when you are aware of everything. Don’t worry about being intrusive, as all surveillance operations can be done remotely.

Besides partnership coding camps, Roblox Education is used in learning programs of local and international coding schools, 3D modeling courses, after-school clubs, and other establishments. They are mostly based in the US, Canada, Brazil, Spain, France, Hong Kong, Netherlands, Singapore, Russia, and the United Kingdom. If you have an educational center, you are free to integrate the platform into your digital classroom without a franchise.

The main mission of Roblox is to unite people through interactive communication, cooperative exploration, and Ñreation. Some of the avid Roblox players grew up with the game and now make a living creating new games or improving the platform. For example, Roblox Product Manager, Matthew Dean, started playing it with his brother when they were 14. Today they are key figures in the dynamic development process.

This unusual gaming platform has prospects for solving complicated technological and scientific problems in the future. Educational initiative is only a small step towards this goal. Even those funny little games that your child creates in Roblox have the capability to result in something more than you anticipate.

Previous Post: « Why Opt For Flutter than React Native, For Developing A Mobile App?
Next Post: 6 Characteristics Of Successful People That Will Make You Unstoppable »

View all posts by Daniel Wilson