You are here: Home / Health and Healthcare / How Blue Light Can Affect Sleep 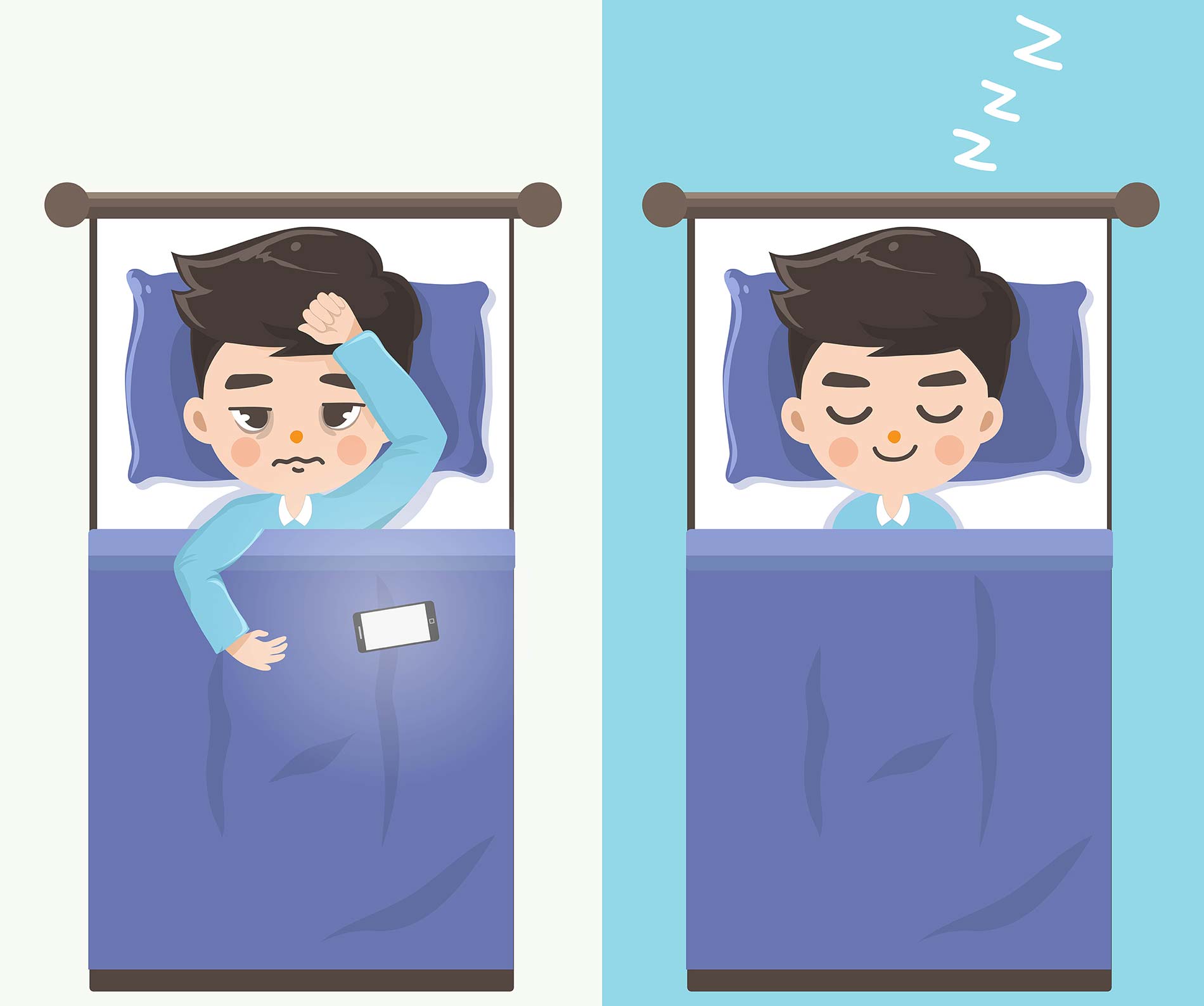 Blue light has definitely been making the news lately, especially as technology becomes more and more integrated into our daily lives. Every now and then you might come across another headline questioning the health risks of extreme blue light exposure.

You might have even heard that you should turn your phone off an hour before going to sleep. Or you might have seen those anti-blue glasses for phones and laptops that are growing more popular every day. But you may not know what blue light actually is.

What is Blue Light?

Blue light is a color on the visible light spectrum. It is a short wavelength, which means that it produces higher amounts of energy. Now it might sound like some villain in the story of our lives, but that’s not the whole story.

The Good Kind of Blue Light

Blue light has been found to help boost alertness, boost moods, better reaction times, and increase the overall feeling of contention. It’s not a bad thing.

The concern with blue light has developed because technology has given us the opportunity to have ceaseless access to blue light, something nature doesn’t allow for.

Links between Blue Light and Sleep

Now, no two people have the exact same Circadian rhythm. Not everyone wakes up early in the morning, not everyone stays up late, and for those that do wake up early or stay up late, they are all on slightly different schedules.

Regardless, a doctor at Harvard’s medical school found, nearly 40 years ago, that natural blue light keeps our bodies aligned with the environment.

More recent studies have found that blue light exposure at night suppresses levels of melatonin. Melatonin is a hormone secreted by the Pineal gland in your brain, and it is responsible for making us fall asleep. It is a hormone that is essential in establishing healthy sleep-wake cycles and is affected by exposure to light.

Studies have found that nighttime light exposure is a big reason behind the general lack of sleep that plagues so many people. Even very dim light can throw off your circadian rhythm, and a smartphone, computer, or TV screen are anything but very dim.

Beyond simply keeping you up at night, blue light has some more serious implications. Humans were never meant to be exposed to the amount of blue light that we are currently and constantly exposed to; our eyes (the cornea and lens) are unable to block or reflect blue light.

New studies have found that when blue light connects with the molecule retinal, it causes a series of potentially toxic chemical reactions within the eye; the point here is that blue light could damage cells in your eyes.

The reason our vision hasn’t already experienced irreparable damage is that a form of Vitamin E reduces the cellular damage and keeps the cells alive. The issue here is that vitamin E levels diminish as we age, and with that, so do our protections against blue light damage. This leads to the conclusion that too much blue light exposure could lead to macular degeneration, which can, in turn, lead to blindness.

There is some evidence that may suggest that, in addition to damaging sleep cycles and corneas, blue light exposure could potentially lead to the development of certain cancers, heart disease, diabetes, and obesity.

Some of this may be explained simply through the lack of sleep that is the result of blue light exposure. Some evidence suggests, tentatively, that lower melatonin levels can be linked with cancer.

A study by the University of Surrey was able to conclude that blue light exposure lowered heart rate, which raises the risk of heart disease.

It is important to remember that more research is needed in this area before certain claims are fully substantiated. Science is in the early stages of learning about blue light, and many researchers that have found causation or correlation in blue-light-related studies don’t really know why that correlation exists.

In other words, blue light exposure is not going to guarantee your development of cancer, diabetes, obesity, and heart disease. There’s just a chance that too much artificial blue light exposure can potentially increase your risk of acquiring any of these diseases.

The one thing science does know for a fact, however, is the damage blue light does to our eyes, which is definitely something to keep in mind, especially as technology becomes ever more fully integrated into our lifestyles.

The risks associated with blue light are real, but there are things you can do about it. Spend ten or fifteen dollars on Amazon and pick up an anti-blue light screen protector for your smartphone.

At night, make sure to lower your phone’s brightness, and maybe even turn on night-mode, which emits a warmer, less harsh light. If you don’t want to pick up anti-blue light glasses, they also sell anti-blue light covers for laptops and PCs, (one of which I’m using as I write this).

The best thing you can do, and something which you will feel the effect of, is simply to avoid being on your phone in the hours before you plan on going to sleep.

Live healthily, do your best to limit your blue light exposure, and then just wait for more studies to come out, to either confirm or disprove what we think we already know.

Iâ€™m a personal trainer based in Denver (Matrix Gym) and a true fitness nerd. If Iâ€™m not training clients or working out at my home gym, Iâ€™m probably skiing, cycling or hiking with my dog Rufus.

View all posts by Daniel DeMoss