You are here: Home / Technology / Why Opt For Flutter than React Native, For Developing A Mobile App? 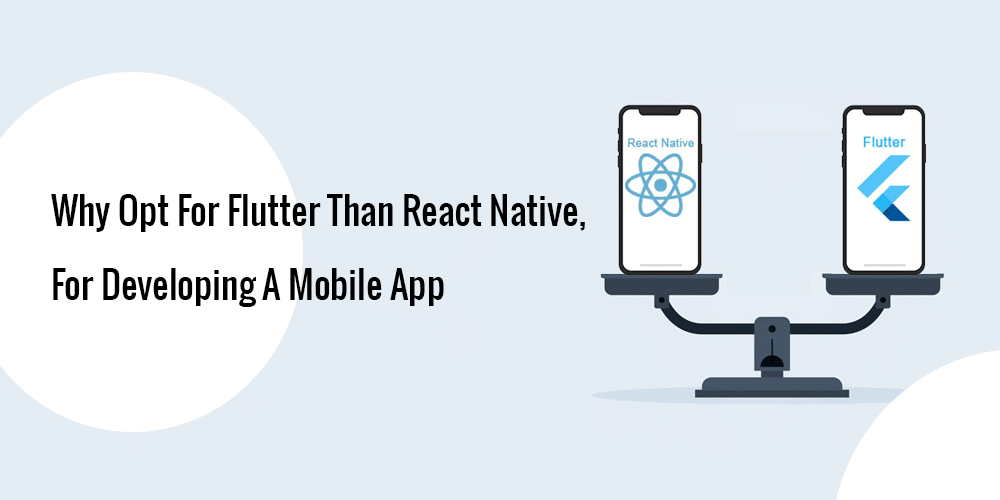 Flutter and React Native the hottest technologies provided by one from Google and another from Facebook has been creating a buzz among the industry. In this blog, we will compare both of them in detail and tell you about the major benefits of flutter.

Due to rapid growth in the IT industry, almost every company required mobile applications for their businesses to compete with the other company in the field and many companies are looking for the best mobile application development company for both iOS and Android platforms as it is faster in speed and took fewer resources.

However, both Apple and Google have provided technologies to build applications. iOS application developers use Xcode and Swift, while Android developers use Kotlin/Java and Android Studio. So as the languages are different the engineers required to learn the complete code of specific platforms which is why companies have started to opt the cross-platform solutions over the native solutions to build up the applications for iOS and Android faster using a single language.

React Native is the project started by the company; Facebook, they open-sourced in 2015. On the other hand, the Flutter project is started by Google and has been promoting by 2017. Both of the technologies have helped developers to build a cross-platform application and faster by using only a single language. Now a time, React Native is already a mature tool and has a huge community but since flutter has been introduced in the market the rate of adoption has been increased. Now we will compare both of them using major 5 criteria.

React Native – It uses JavaScript to build cross-platform applications. As it is the very popular language in the web community at this moment, majorly it is used with the react and the other popular framework. JavaScript is a dynamically typed language and everyone knows that anything can be done with that, which is good and bad too at the same time.

JavaScript is widely used by almost every developer and itâ€™s easy to adopt the React Native framework. Dart also has its own benefit but itâ€™s rarely used and less known by the developers. By noticing this, React Native has got a win at this point.

Flutter – It uses the Dart framework which gives you the many inbuilt components and bigger in size and doesnâ€™t require a bridge to communicate with the native modules. Dart provides a lot of frameworks like Design, Material, and Cupertino, that provide all the needed technologies to develop a mobile application.

Flutter has most of the native components in its framework and doesnâ€™t need a bridge to communicate with the native modules that come with poor performance.

React Native – In starting React Native assumes that the developer has already done all the setup work for developing the mobile application. There are little bit commands available on the Xcode but thatâ€™s not sufficient. The documentation straightly jumps to creating a new project. There is no guide material for Android projects in the React Native document.

From the above comparison, itâ€™s clear that the Flutter offers better than the React Native in the documentation, CLI support for the configuration and setup.

React Native – It includes fewer components and framework provides UI rendering and device access APIs. React Native has to rely on third parties to access most of the Native modules.

Flutter – In this framework is bundled with UI rendering components, navigation, testing, and device API access. There are rich components that remove the need to use third-party libraries.

Now Flutter is rich in development APIs and UI components instead of React Native that is too much dependent upon third parties.

React Native – If the developer is skilled in JavaScript, and then it will easy to use them for developing cross-platform mobile app development. It has the best feature that saves a lot of developer time while testing everything.

Flutter – It also has the best feature but itâ€™s quite easy to start with the demo application but as the complexity of the application grows, developers has to learn about the few flutter concepts and especially Dart is not a common language and there is a lack of support in many IDEs.

React Native has got a point as it has great developer support in IDEs. Flutter is nearly new in this but will catch up very soon as the community of Flutter has grown.

The Flutter and React Native both have their pros and cons but in this flutter have come out to be the winner. Some of the experienced developers have said that Flutter has a strong future in the mobile app development company industry. Considering all the above comparison, it shows that Flutter is getting stronger in the development of cross-platform mobile development.

Previous Post: « Reasons to Visit Nashville During the Holiday Season
Next Post: How Roblox Education Initiative Changes the Modern Education »

Ananya Jain is a Digital Marketing Executive in Tech Gropse Pvt. Ltd.; Mobile app development company. She has provided her services independently. Expert in Content writing and know basic parts of web development too. If you have any confusion, or question, or need any consultation regarding the digital marketing process, feel free to contact her.

View all posts by Ananya Jain